Polestar 2 named ‘Best All Rounder’ at the TopGear Electric Awards 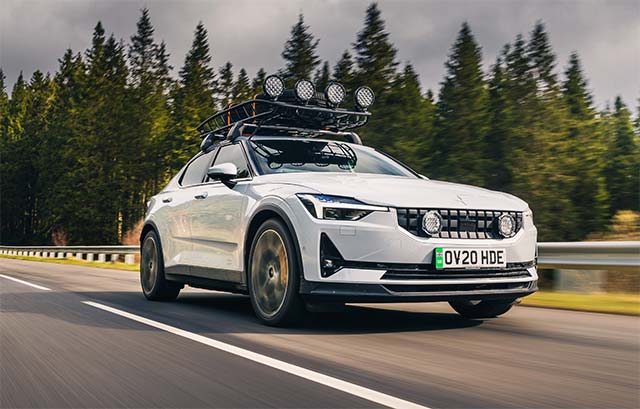 The BBC TopGear Magazine has named Polestar 2 its Best All Rounder in its 2021 Electric Car awards.

Judged against the greatest electric cars in the world right now, the performance electric fastback was praised for simply being one of the most rounded everyday EVs on the market. The magazine continued to compliment its subtle interior, stylish rather than self-conscious exterior and concluded it balanced personality with mature style.

For the 2021 Electric Car awards special issue, BBC TopGear Magazine set about modifying a Polestar 2 into its vision of an adventure-ready electric fastback. Using a Polestar 2 with Performance Pack as its base, the magazine loaded an aero-optimised roof rack with spare wheels and tyres and supplemented the car’s standard-fit Pixel LED headlights with extra driving lights.

With four on the roof and two integrated into the car’s Grid, this particular Polestar 2 proved to be the brightest star on Kielder Forest’s dark tracks as it scouted out Polaris (the pole star).

Equipped with traction boards, spare water and all the kit required to hunt for the pole star, the Polestar 2 also made use of its fully-adjustable Öhlins dampers that come as part of the Performance Pack along with lightweight forged 20-inch alloy wheels and bespoke Brembo brakes. By adjusting between the 22 settings for the dual-flow valve dampers, BBC Top Gear Magazine was able to fine-tune the car’s responses for the rough roads around the national park’s observatory.

BBC TopGear Magazine’s Tom Ford said: “The Polestar 2 is a standout. Not because it’s perfect, but because it has a gentle character that gives it just that little measure of soul. If the future of electric cars is built on first attempts like this, then the future is bright for EVs. And like the star that shares its name, the Polestar leads the way.”

Although not available for general purchase, the extra kit added to the Polestar 2 proves how versatile the Swedish manufacturer’s electric performance fastback is. And with recently announced additions to the model range, with single motor versions and alternative battery sizes, that versatility is offered to those wishing to purchase a Polestar 2 directly from the manufacturer at Polestar.com. Prices start at £39,900 OTR in the UK.