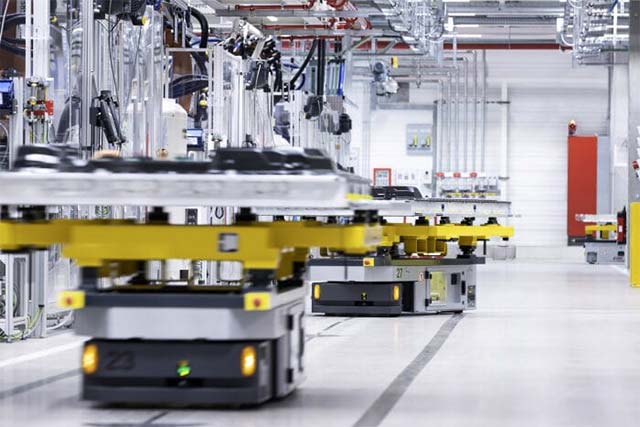 Mercedes-Benz has begun producing high-performance battery packs for its all-electric luxury EQS sedan at its Stuttgart-Hedelfingen plant in Germany’s Untertürkheim, ahead of the sedan’s world premiere on April 15, 2021.

The Mercedes-Benz EQS is the first in a new generation of high-performance electric cars, with a range of over 700 kilometers (WLTP) thanks to a high-efficiency powertrain and advances in battery energy density. The Hedelfingen plant has been converted into an important part of the company’s global battery production network after successfully integrating battery production alongside existing transmission production.

The key pillars of Mercedes-Benz’s electric initiative are a rapid ramp-up of global battery production capacities and targeted expansion of battery competencies across the entire value chain, from basic research to cell production and battery afterlife, including 2nd-life applications and recycling.

This in-house expertise and vertical integration are critical for taking the lead in electric cars. In addition to increasing EQS battery production, Mercedes-Benz Drive Systems Campus Untertürkheim will expand its research and development activities in the field of e-mobility, as announced earlier this month, by establishing a campus for electric and electrified drive systems.

“The roll-out of our electric initiative is accelerating as we pursue CO2-neutrality. Our next all-electric model – the luxury sedan EQS – built on a dedicated electric platform is already in the starting blocks. The start of production of its high-performance battery systems in our plant in Stuttgart-Hedelfingen is therefore an important milestone”, says Markus Schäfer, Member of the Board of Management of Daimler AG and Mercedes-Benz AG; responsible for Daimler Group Research and Mercedes-Benz Cars COO. “As part of the transformation of our company and our products, we are significantly expanding our battery competencies across the entire value chain. Thereby we continue to make efforts to help the next generation of batteries achieve a breakthrough even faster.”

The Hedelfingen plant, as part of the Mercedes-Benz Untertürkheim location (Germany) is responsible for the production of battery systems for the Mercedes-Benz EQS, as well as the upcoming EQE. The plant has a production and logistics area of about 16,500 m², relying on state-of-the-art systems including a wide range of Industry 4.0 technologies. The highly complex lithium-ion battery system is produced on an approximately 300 meter production line with more than 70 production stations and with a high number of automated as well as manual steps. A variety of components including up to 12 cell modules and the so-called EE-compartment for the intelligent integration of power electronics make up the EQS battery system. The EE-compartment is assembled by the Mercedes-Benz Berlin site.

The EQS will be equipped with battery layouts enabling different range and performance variants. With an installed energy content of up to 108 kWh, the EQS targets, according to WLTP a range of more than 700 kilometres, aided by best-in-class aerodynamics. The in-house-developed software technologically enables updates over the air (OTA), ensuring that the energy management of the EQS will remain up-to-date over the entire lifetime of the vehicle. Besides its CO2-neutrally produced cells, the EQS battery cell chemistry includes nickel, cobalt and manganese in a ratio of 8: 1: 1, cutting the cobalt content to around ten percent.

Production plays a decisive role in the sustainability understanding of Mercedes-Benz AG. The EQS is produced alongside the new S-Class at the “Factory 56” in the Sindelfingen plant, which operates CO2-neutrally from the beginning. As early as 2022, the company’s own Mercedes-Benz passenger car and van plants worldwide and thus also the Hedelfingen plant will operate CO2-neutrally.

With the bundling and extension of its battery activities at the Mercedes-Benz Drive Systems Campus at the Untertürkheim site (Germany) the company strengthens its expertise in the field of e-mobility. Research and development activities are already anchored at the location, such as the e-technology center and cell technology center, where, among other things, prototypes for the electric drive system are built and cell technologies are researched and tested. The findings from our international research hubs will be centralized at this location.

In order to deepen its competence as a center for battery technology, a new factory for the small-series production of future lithium-ion battery cells is being planned, starting its operations in 2023. The sustainability factor, transparent cell development through to recyclability, plays a major role in this. The focus on in-house know-how and high vertical integration is key for a leading role in electric vehicles. Mercedes-Benz plans to invest a three-digit million amount in the transformation of the site.

The electric offensive of Mercedes-Benz AG

2021 stands above all for the acceleration of electrification at Mercedes-Benz Cars – expecting to increase the xEV share to approximately 13%. Under the umbrella of its progressive sub-brand Mercedes-EQ, Mercedes-Benz AG is underlining its claim to lead in the field of electrification and digitization by offering its customers a perfect balance of sustainability and emotion with the demand for innovation. A total of four new Mercedes-EQ models will be presented: the EQA, EQB, EQE and EQS. Plus, the plug-in hybrid family, currently consisting of more than 20 model variants, will be renewed with electrified derivatives of the C-Class and the S-Class with all-electric ranges of around 100km. In less than two years, the Mercedes-EQ family will be comprised of more than ten fully electric EQ models along all segments.