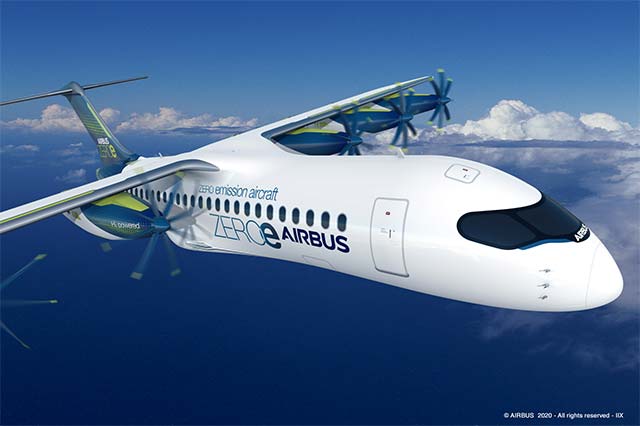 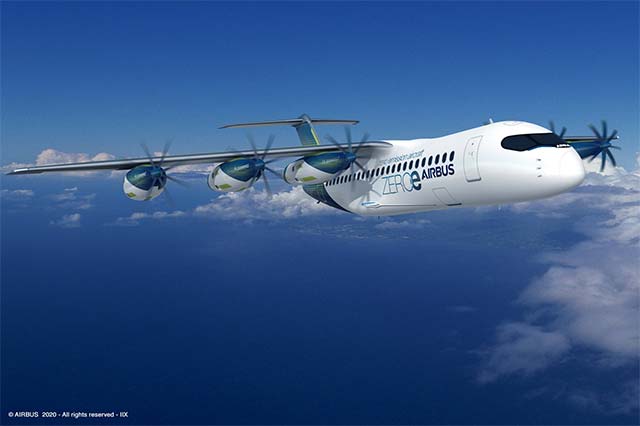 It is unlike anything seen on today’s runways: the “pod” configuration—one of several being conceptualised as part of ongoing R&D on the ZEROe concept aircraft—features a series of stand-alone propulsion systems based on hydrogen fuel cell technology. Today, Airbus is conducting studies to determine how scalable the “pod” configuration, among others, could be to large commercial aircraft.

Twinjet, s-duct, winglets, contra-rotating propellers: the aviation industry has developed numerous configurations over the last five decades that have enabled aircraft to fly higher, faster and longer. Now, Airbus engineers are unveiling a new configuration as part of the ZEROe programme that could enable a passenger aircraft to fly farther than ever without emissions.

The innovative approach consists of six, eight-bladed “pods” mounted beneath the aircraft wing. While the “podded” engine is not a new concept in aviation, these “pods” are not designed to be driven by any ordinary propulsion system: hydrogen fuel cells are among the key components.

“The ‘pod’ configuration is essentially a distributed fuel cell propulsion system that delivers thrust to the aircraft via six propulsors arranged along the wing,” explains Matthieu Thomas, ZEROe Aircraft Lead Architect. “Hydrogen fuel cells have very different design considerations, so we knew we had to come up with a unique approach.”

Indeed, hydrogen fuel cell technology has yet to be scaled up to a passenger-size large commercial aircraft. Smaller experimental hydrogen aircraft, comprising up to 20 seats, can rely on a traditional fixed-wing configuration with two propellers. But more passenger capacity and longer range require another solution. This is why Airbus is studying a variety of configurations, including “pods,” to determine which option has the potential to scale up to larger aircraft.

“This ‘pod’ configuration is a great starting point to nurture further inquiry into how we can scale up hydrogen technology to commercial aircraft. This is one option, but many more will be conceptualised before we make a final selection, a decision that is expected by 2025,” says Glenn Llewellyn, VP of Zero-Emission Aircraft. 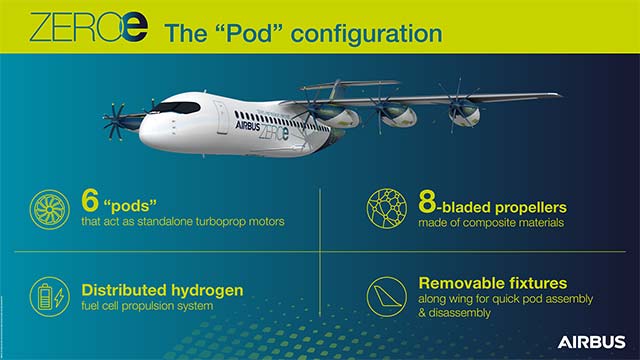 A pod configuration for propeller propulsion

Each “pod” is essentially a stand-alone propeller propulsion system powered by hydrogen fuel cells. It consists of the following elements:

Hydrogen and air are supplied to the fuel cells to generate electric current. Power electronics convert the current to power the electric motors. Thanks to this energy, the motor shaft rotates, thereby turning the propeller.

Another striking feature of the “pod” configuration is its removable fixtures. This means each “pod” can be disassembled and reassembled in record time. This approach could provide a practical and rapid solution for maintenance and potentially hydrogen refuelling at airports.

The pod’s eight-bladed propellers, made of composite materials, are shaped to provide added thrust during the takeoff and climb-out phases of flight. The advanced airfoil design is expected to lead to improved efficiency and performance.

Although advanced in its design, the “pod” configuration still requires a lot of work to determine whether it could be a suitable solution. To date, it remains one of many exciting technology options that Airbus engineers are considering as they work towards launching the ZEROe programme.

“This ‘pod’ configuration is a great starting point to nurture further inquiry into how we can scale up hydrogen technology to commercial aircraft,”  Glenn Llewellyn, VP of Zero-Emission Aircraft, explains. “This is one option, but many more will be conceptualised before we make a final selection, a decision that is expected by 2025.”

A patent application for the “pod” configuration will be published in December 2020, 18 months after its initial submission. This highlights that Airbus has been working on ZEROe since at least 2018. Several more patent applications are expected to be submitted over the coming months and years as R&D continues on the ZEROe programme.