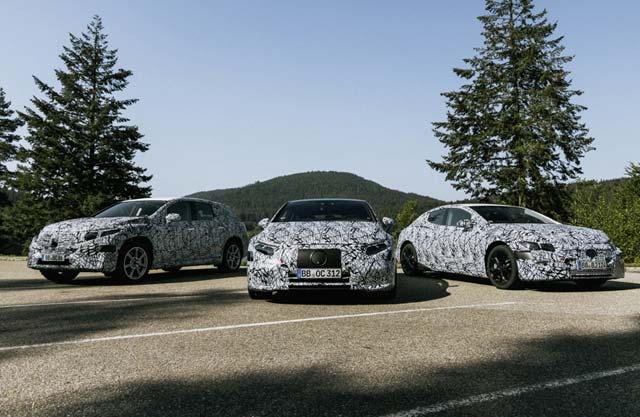 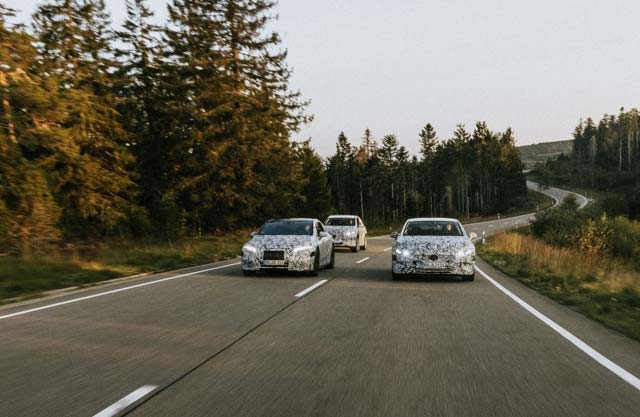 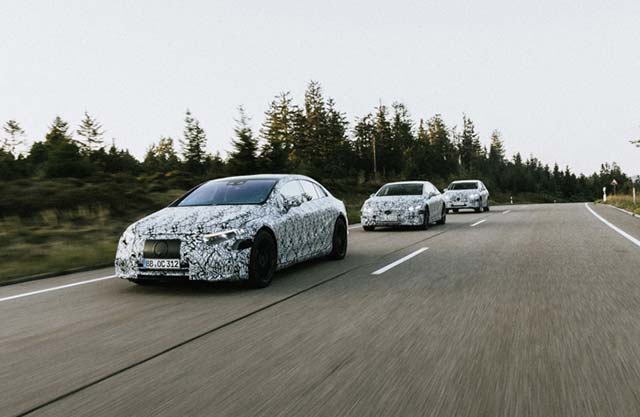 The new generation of electric vehicles in the luxury and executive segment is based on a custom-developed architecture, which is scalable in every aspect and can be used across model series. The wheelbase and track as well as all other system components, especially the batteries, are variable thanks to the modular design. The vehicle concept is thus optimised to meet every requirement of a future-oriented, battery-electric model family. This vehicle architecture makes it possible to build Mercedes-Benz electric cars from saloons to large SUVs.

The EQS will allow customers in the luxury segment to fully benefit from all the advantages of an all-electric architecture with respect to space and design. With ranges of up to 700 km (according to WLTP), the EQS meets the requirements on a progressive saloon in the S-Class segment in this respect as well. At the same time, Mercedes-Benz remains faithful to its recipe for success in production, and designs its vehicles and factories to be able to build different models flexibly on the same production lines. The electric vehicles also use pioneering cross-sectoral technologies from Mercedes-Benz such as, for example, the MBUX (Mercedes-Benz User Experience) control and display system or the driving assistance systems.

The Mercedes-Benz Vision EQS concept car provided pointers to the progressive design of the coming EQS in September 2019. The camouflaged prototypes undergoing testing are also foretelling key design features that are revolutionary for the luxury segment such as the cab forward design or the coupé-like ‘one-bow’ styling. However, further details of the progressive design of the models EQS SUV, EQE and EQE SUV crucial for the success of the electric initiative remain a secret to the public for the time being.

Mercedes-Benz will introduce the all-electric architecture in 2021. At the same time, the company will continue to electrify the most successful platforms. In addition to the EQC mid-size SUV and the all-electric EQV people carrier, customers in the compact car segment can look forward to two all-electric SUVs, the EQA and EQB. Their progressive design identifies them as members of the all-electric product range. Production of the EQA will commence before the end of this year.

Final spurt toward series production: the EQS on the last stages of testing

The EQS is currently undergoing the last tests on the way to production maturity, including at the Test and Technology Centre in Immendingen. The systematic validation of the overall vehicle serves to guarantee the high quality standards and is one of the extensive measures in the development process of every Mercedes-Benz model series. Stations include tough winter testing in Scandinavia, chassis and drivetrain tests on proving grounds, public roads and on the high-speed test track in Nardo as well as the integrated testing of the overall vehicle in the heat of Southern Europe and South Africa. Test drives are currently also being conducted in China and the USA. In the case of the EQS, special attention is paid to the electric powertrain and the battery, of course. They too are tested and approved in accordance with the strictest Mercedes-Benz standards.

“The EQS has already piled up far more than two million test kilometres from the heat of South Africa to the cold of Northern Sweden”, says Christoph Starzynski, Vice-President Electric Vehicle Architecture at Mercedes-Benz and responsible for the EQ vehicles. “The EQS will be the S-Class of electric vehicles. That is why it is undergoing the same demanding development program as any other vehicle that has the privilege of proudly bearing the three-pointed star. In addition, there were quite a few tests specifically for electric cars that cover important development priorities such as range, charging and efficiency”.

The EQS is produced together with the S-Class in “Factory 56” in Sindelfingen, one of the world’s most modern car factories. For quite some time, flexibility in the plants has been an investment priority of Mercedes-Benz Operations (MO), which is responsible for passenger car production worldwide. The technical equipment featuring trailblazing Industry 4.0 solutions is a key factor in the flexibility. Thanks to the highly flexible structures, all plants are able to produce vehicles with different types of powertrains and thus also to respond quickly to changes in demand in the markets. Electric-mobility opportunities can be seized with a limited investment need.

As part of its “Ambition 2039” initiative, Mercedes-Benz is working on offering a CO2-neutral new car fleet less than 20 years from now. The company wants electrically powered cars including all-electric and plug-in hybrid vehicles to account for more than half of its sales already by 2030.