Electric vehicles will triple market share in Europe in 2020 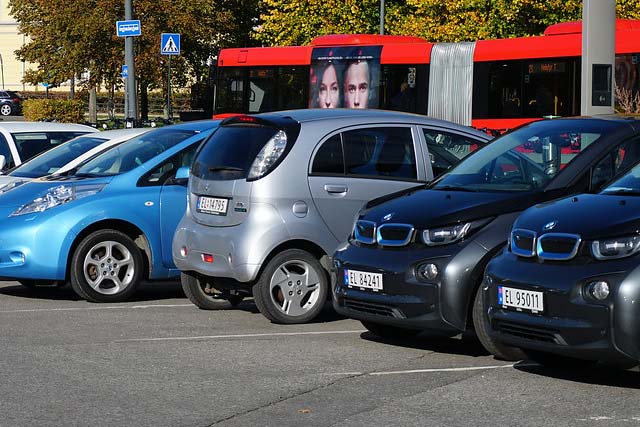 Electric vehicles will triple their market share in the European market, including the UK, this year as a result of EU car CO2 targets, new Transport & Environment (T&E) analysis shows.

Despite the pandemic, EV sales have surged since 1 January, just as the emissions standards kicked in, and will reach 10% this year and 15% in 2021.

The growing sales of electric cars across Europe have resulted in a significant drop in new car CO₂ emissions. This reduction means some OEMs have already achieved their 2020 CO₂ targets, whilst many others are getting very close to meeting theirs. From the levels of over 122g/km in 2019, the H1 2020 new car CO₂ emissions dropped to 111 g/km, the largest drop since the standards came into effect in 2008.

As of 1 July, the PSA Group, Volvo, FCA-Tesla and BMW Group are already compliant based on their H1 2020 performance, while Renault, Nissan, the Toyota-Mazda pool and Ford have a mere 2 gCO₂/km gap left, or a gap of just 1%-2%. Those that achieved least improvement so far and furthest from their targets are Daimler and Jaguar-Land Rover, with a 9 g/km gap (9%) and 13 g/km (10%) respectively. The Volkswagen Group (awaiting the sales of ID.3) is in the middle with 5 g/km (or 5% gap), together with Hyundai-Kia with 7 g/km (8%) and 3 g/km gaps respectively (3%). 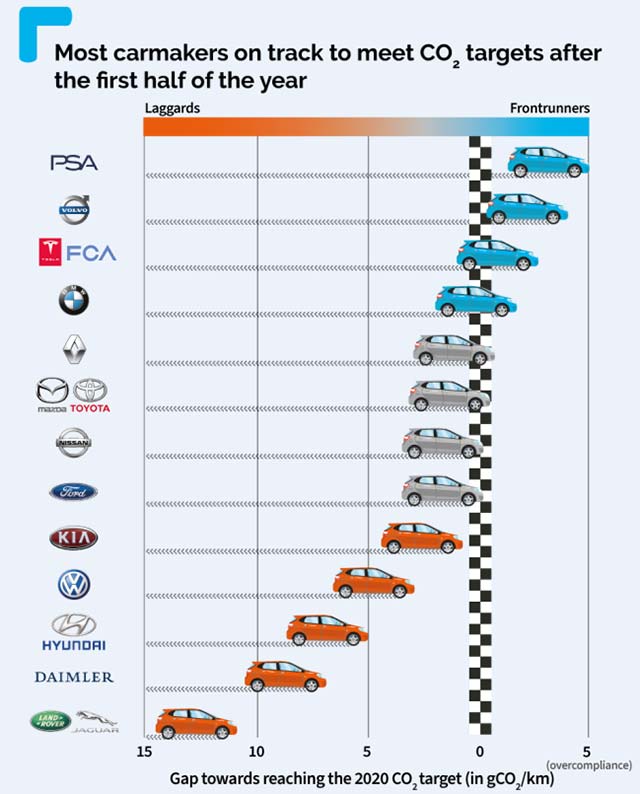 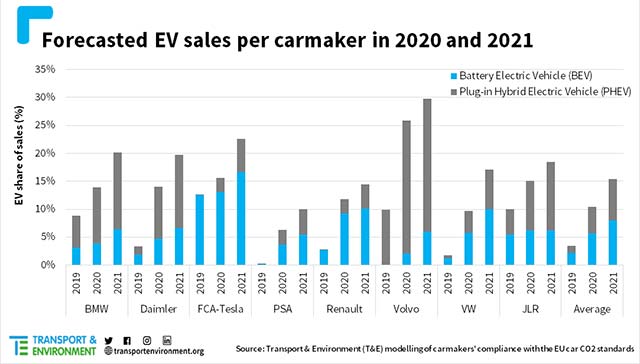 But T&E, which analysed sales in the first half of 2020, said the UK supply of electric cars is likely to dry up next year in the absence of British regulations equivalent to those in Europe.

Greg Archer, UK director at T&E, said: “Electric car sales are booming thanks to emissions standards. Next year, one in every seven cars sold in Europe will be a plug-in. European manufacturers have EVs to sell, but from January they’ll have no incentive to sell them in the UK unless the government requires them to do so.”

Carmakers must meet targets to reduce the average emissions of the cars they sell in Europe, or pay fines. But from 2021, UK sales of EVs will not help manufacturers achieve EU standards. The government has so far failed to make parliamentary time available for equivalent new UK regulations to encourage sales here. These must be introduced by the end of October to be in place by January and maintain supplies of electric cars to the UK.

T&E analysis shows that the current draft regulation contains errors that will lead to about a fifth less EVs being sold in the UK than was likely if it had remained a part of the existing EU scheme. This is despite government claims that the rules are equivalent to those in the EU.

Greg Archer concluded: “The electric car is becoming mainstream but we risk turning off the tap in Britain. Carmakers will prioritise EV sales in markets where laws and tax breaks encourage them most, but the UK’s proposed standards are too weak and maybe too late. Government needs to quickly introduce regulations equivalent to the EU’s in 2021, or demand for electric cars will outstrip available supply and drivers will be left with long waits to secure their new electric car which will be more expensive.”

The government has announced it plans to phase out the sale of all new cars with engines by 2035 at the latest and may bring the date forward as early as 2030. But without these regulations, the growing market will stall.