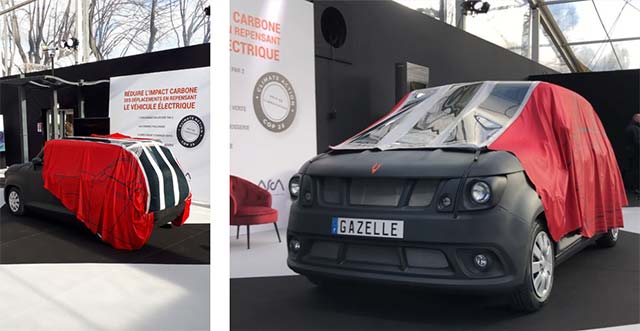 According to Nantes-based ARMOR, the new solar cell technology, called ASCA, weighs only about 450 grams per square meter, about six times more of a similar sized piece of paper.

From the technical point of view, the solar car cover is composed of a stain-resistant fabric, with 9 ASCA solar module covering a total surface area of 4m².

The manufacturer said that the films can be folded at least 50,000 times without efficiency losses. They are about 30 times lighter than other PV technologies. This allows for easy integration into the tarp. The solar film can also be applied directly to the body of any electric vehicle, or it can be integrated into the panoramic roof, passenger windows, or sun visors.

The first prototype solar car cover was unveiled earlier this year at the International Automobile Festival.

ARMOR worked with two other French companies – ACPV and Gazelle Tech, a startup company that developed the Gazzele electric car.

The Gazzele electric car has a self-supporting chassis made of composites. This innovative and patented technology called Aerocell makes the car extremely lightweight. It only weighs 650-700 kg, compared to around double for a comparable 5-seater vehicle.

The minimized weight significantly improves the car’s energy consumption, an improvement of some 40% compared to an equivalent model. The Gazelle therefore has a range of 180km (112 miles) at only 4 hours charging using the domestic power supply.