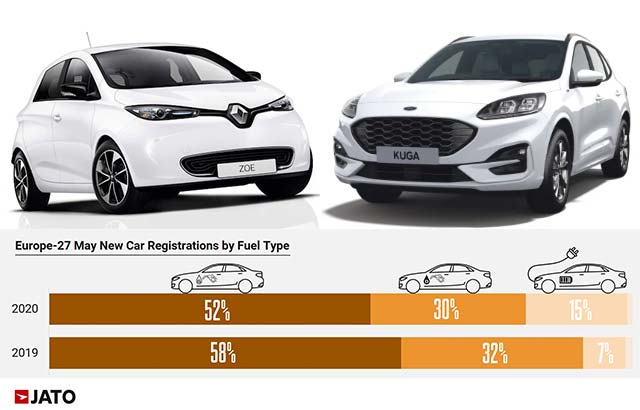 The evolution of the European automotive industry has continued as the global pandemic has continued to loom large over the sector. New car registrations fell by 57% in May down to 622,067 units across 27 markets – taking the cumulative results for 2020 to 3.95 million units, down by 43% year on year.

Although this seems like a significant decrease, May’s result mark a positive turning point, up from the decrease registered in April, when the volume fell by 78%.

Nonetheless, there were a number of positive factors for the automotive industry in May. Private registrations gained significant traction, demonstrating that the decrease seen in April was mostly driven by lockdown and fewer consumers acquiring new cars.

While gasoline and diesel new car registrations decreased by 62% and 59% respectively in May, electrified vehicles posted a moderate decline of just 8%. In fact, their volume fell from 103,400 units in May 2019 to 95,300 units last month. This small decline allowed electrified vehicles to increase their market share from 7.2% in May 2019 to 15.3% in May 2020, taking the year-to-date volume to 600,500 units. This is less than half the total recorded by diesel cars, at 1.17 million units.

Growth was driven by PHEV, as the models offer a viable alternative for those hoping to buy a more affordable cars than pure electric vehicles.

The Renault Zoe led the ranking among the electric vehicles, but the Volkswagen e-Golf was the true driver of growth in May. The Ford Puma also outsold the Toyota Yaris, and the Fiat 500 secured sixth position among hybrids – both mild hybrids. The PHEV were led by the new Ford Kuga, clearly impacting the popularity of the Mitsubishi Outlander PHEV.

For the second time this year, the Renault Clio led the European ranking by models, outselling the popular Volkswagen Golf. Both models recorded double-digit declines, but its availability supported its success. Its model switch is a significant contributing factor as the latest generation is now fully available in many markets. In fact, the 5th generation contributed to 80% of its registrations in May. In contrast, the Volkswagen Golf, which also faced model changeovers at the same time, did not benefit from their latest generation as the company had to interrupt deliveries due to a software error in mid-May. The lack of availability of the new Golf – which accounted for 17% of its registrations during the month – explains the bigger decrease.

The Clio was not the only French model to occupy an important position. Thanks to a new generation, the Peugeot 208 ranked third with almost 11,000 units. 4 SUVs also hit the top 10, meaning these vehicles continued to dominate European roads. Last month, 4 out of 10 new cars registered were SUVs, with their volume decreased by 53% to 250,000 units in May 2020/ This segment was led by the Renault Captur, Volkswagen T-Roc, Dacia Duster, Volkswagen Tiguan and Peugeot 2008. Other SUVs that performed well in May, were the Ford Puma with 5,523 units, Skoda Kamiq with 4,036 units, Mazda CX-30 with 2,936 units, Mercedes GLE up by 116% to 2,919 units, and Audi Q3 Sportback with 2,825 units.

The worst performing segments were the MPVs, city-cars, luxury sedans, compact cars and executive sedans. In fact, the MPVs registrations fell so heavily that they were outsold by the Vans (LCV-derived), now more popular among European consumers.