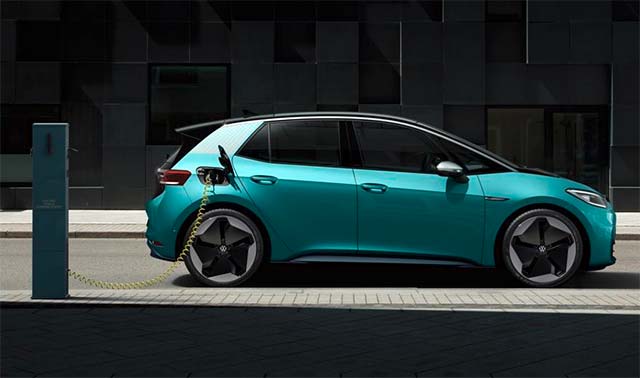 New technology always makes lots of people uncomfortable. Unfortunately, there are always some people who spread false information about new technology, especially if it threatens to interrupt their source of income.

Misconception 1: “Electric cars are just as harmful to the environment!” 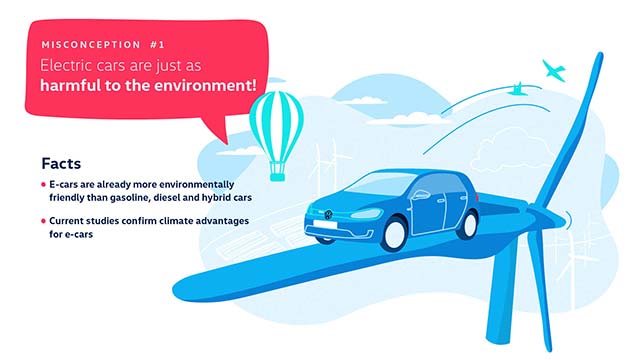 A glance at the CO2 balance sheet shows that even at the current average EU electricity mix, electric cars are more environmentally and climate-friendly than comparable diesel, hybrid or petrol vehicles. This is the result of numerous recent studies by independent scientists and organizations – including the Fraunhofer Institute, Agora Verkehrswende (traffic transition) and the Federal Environment Agency. In the past, the CO2 emissions from battery cell production were also often set too high. Among other things, the “Sweden Study” by the Swedish environmental institute IVL, often quoted by opponents of e-cars, recently corrected its assumptions and drastically lowered them. According to the study, CO2 emissions from battery production are only half as high as previously assumed. The bottom line is that the e-car is the best choice for more climate protection in car traffic.

Of course, the climate protection advantage of e-cars is greatest when both the production of the battery cells and the electricity for charging comes from renewable energies. Volkswagen is therefore going one step further and, with the ID.3, is making a car CO2-neutral on the balance sheet for the first time. Among other things, the battery cells are manufactured using green electricity, and the Zwickau plant also purchases green electricity. Following the same principle, the ID.4 from Zwickau is also trimmed for climate neutrality. The ID. Family is thus becoming a pioneer for sustainable mobility.

Misconception 2: “Only high-income earners can afford an electric car!”

– The German purchase price of the ID.3, after the deduction of the environmental bonus, is cheaper than a comparable combustion engine equivalent
– ID.3 drivers’ save around 70 euros per month in running costs 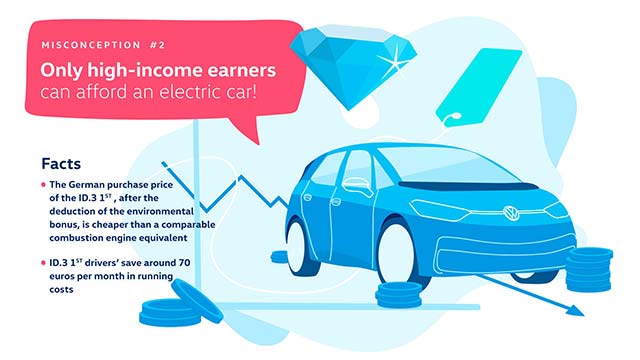 In the past, electric cars cost significantly more than comparable gasoline or diesel cars. With the introduction of the ID.3, the tide is turning. For the first time, the electric car is now fully competitive in terms of cost and can compete with comparable combustion engine models. Thanks to the new environmental bonus in Germany, e-car drivers can now even make significant savings compared with the internal combustion engine models. The price no longer works against the e-car, but rather for it.

A calculation example with the Volkswagen ID.3 : the basic model costs less than 30,000 euros. Once the maximum environmental bonus of €6,570 is deducted, the purchase price for the basic version of the ID.3 is therefore less than 23,430 euros. It is therefore significantly less expensive than comparable combustion engine models such as the Golf Life 1.5l TSI with 130 hp (26,640 euros) and the Golf Life 2.0l TDI with 115 hp (28,105 euros). Even an ID.3 with a range of 420 kilometers costs less than 28,430 euros after the deduction of the environmental bonus and is thus on a par with a diesel.

On top of this: During the usage phase, drivers of the ID.3 save a further 70 euros per month compared to internal combustion engine models. Among other things, the lower energy costs, the non-payable vehicle tax and better insurance class ensure the noticeable price advantage. ID.3 owners do not need to worry about the residual value either: The residual value should be similar to that of a combustion engine. The used car market is already showing increasing demand for battery vehicles suitable for everyday use. The 8-year battery warranty or 160,000 km offers additional protection. The bottom line is that the ID.3 performs just as well or even better than a comparable internal combustion engine in terms of overall costs, depending on the model variant.

Misconception 3: “The batteries deteriorate too quickly and cannot be disposed of”

– Volkswagen guarantees capacity for eight years, or 160,000 kilometers
– No hazardous waste: the batteries can be recycled 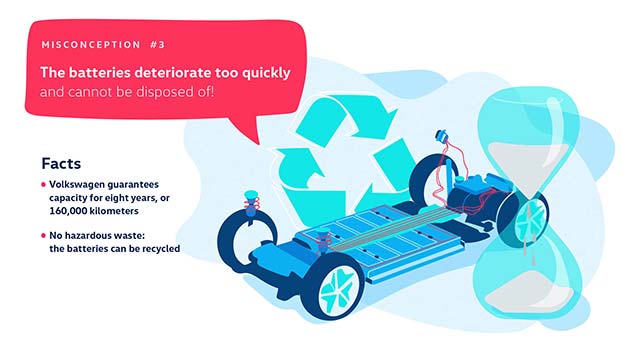 Essentially, Volkswagen batteries are designed to last the entire life of a car. For eight years or 160,000 kilometers, the brand guarantees a minimum battery capacity of 70 percent – regardless of charging behavior. A great deal is done to achieve this: the batteries are actively cooled or warmed, and the battery management system also balances the individual cells. This ensures that the battery always operates in the best possible operating range.

If at some point the battery’s service life is exceeded, it is by no means sent to a landfill as hazardous waste – but is recycled. This year, Volkswagen is opening the first pilot plant for battery recycling in Salzgitter. The aim is to return valuable raw materials to the manufacturing process chain. These include above all nickel, manganese, cobalt and lithium. Initially, 1,200 tons per year are to be recycled here – equivalent to 3,000 vehicle batteries. A further increase in capacity is being considered for the years thereafter.

Misconception 4: “Electric cars are only for short distances – especially in cold weather!”

– The ID.3 charges enough electricity for 290 kilometers (WLTP) in just 30 minutes
– More than 2,200 new fast-charging parks are currently being built throughout Europe 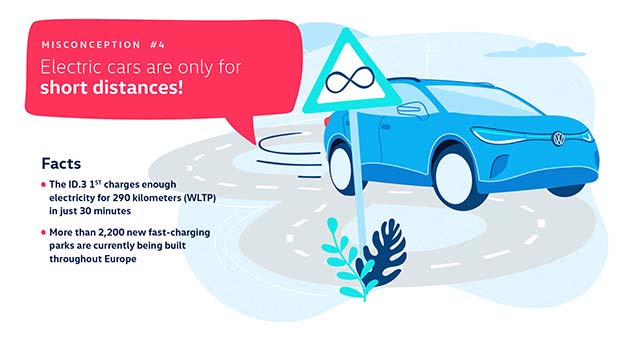 That electric cars reach their maximum limits over long distances is now history. The new e-models have significantly larger batteries and thus also longer ranges of up to 550 kilometers. The quick charging capability of e-vehicles is also improving all the time: they charge ever greater amounts of electricity in ever shorter periods of time. Whereas the e-Golf previously reached its charging limit at 50 kW, the ID.3 1st can charge at 100 kW – twice as fast. Within 30 minutes, it recharges electricity for around 290 kilometers. For the ADAC (German Automobile Association), an e-car is considered suitable for long distances if it can recharge energy for 200 kilometers in 30 minutes.

Just as important as the charging capacity is the increasingly dense network of rapid charging stations. Through IONITY, Volkswagen is participating in the establishment of 400 fast-charging parks throughout Europe. An IONITY park is to be set up every 120 kilometers in the future. Other suppliers also want to expand their networks significantly in the coming years. A total of more than 2,200 new fast-charging parks are currently being planned in Europe. As an e-car driver, you will no longer have to look for the next charging facility – it will always be nearby.

Misconception 5: “There’s more or less nowhere around to charge an e-car!”

– There are currently around 24,000 charging stations in Germany
– Independent of the provider: With We Charge 150,000 charging points throughout Europe are available. 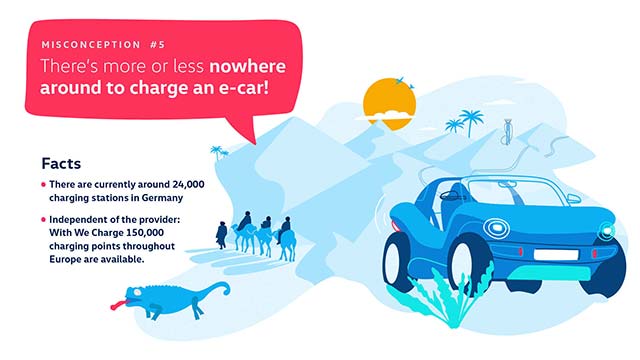 The charging infrastructure is improving all over Germany. The number of charging stations for electric vehicles has increased from around 6,700 in the first quarter of 2018 to around 24,000 in spring 2020. At almost 25 percent, most of the charging stations are located adjacent to parking spaces and in car parks. Plans have also been drawn up for supplying electricity to highway locations: IONITY alone – a joint venture of car manufacturers – is currently building a high-power charging station every 120 kilometers along Europe’s highway network. A total of 400 stations are to be installed by the end of 2020.

Admittedly, there are many different charging station operators in Germany. But to charge there, users do not necessarily need their own charging card or an app from these providers. It’s much easier: with just one charging card – the WE Charge Card from Volkswagen – users will in future be able to charge simply and easily at a wide variety of charging points. It can be used at around 150,000 charging points throughout Europe – and the charging network is constantly being expanded. The WE Charge App will also offer a charging station finder. Charging will therefore become more and more relaxed.

– Experts say: e-cars are just as safe as conventional vehicles
– Charge management software and a steel body protect the battery 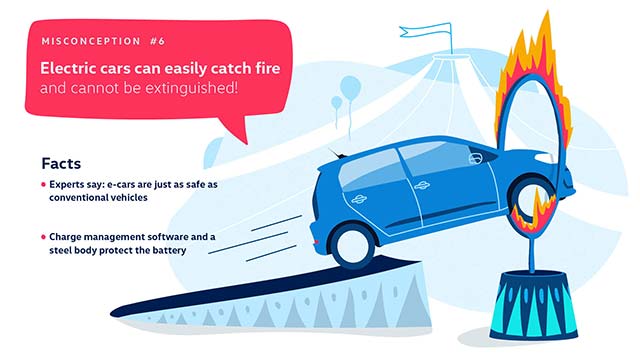 The alleged fire hazard of electric cars is a recurring theme in the public eye. As a general rule, it is suggested that e-cars catch fire particularly easily. Karl-Heinz Knorr, Vice President of the German Firefighters’ Association, puts these reports into perspective: “E-cars do not burn more severely or more often than gasoline or diesel vehicles, just differently.” Tests conducted by the ADAC have also repeatedly shown that the risk of fire is just as low for e-cars as for internal combustion engines. In its current recommendation, the German Fire Brigade Association writes: “Certified electric vehicles pose largely comparable risks to vehicles with other types of drive (fuel). Fire tests have also shown that the fire performance among vehicles of one generation and size is comparable regardless of the type of drive”. In case of fire, batteries can also be extinguished with water.

With the ID.3 both the fire hazard and the risk of electric shock are minimized by special safety systems. In the event of an accident, the current flow of the battery is immediately interrupted. The battery system of the ID.3 is protected by a special crash frame. For the first time at Volkswagen, there is also a fully covered, solid underbody protection.

Misconception 7: “There are not enough raw materials and extraction harms both people and the environment!” 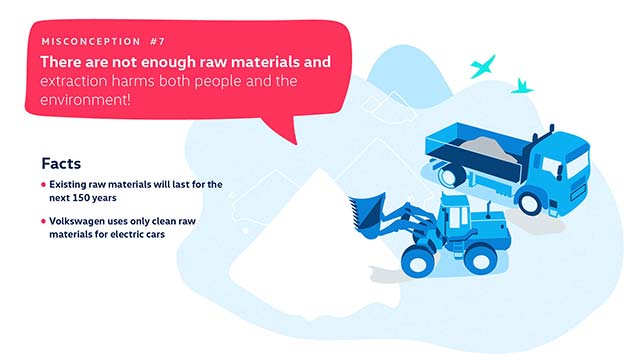 The lithium-ion battery is the heart of an electric car. Cobalt and lithium are needed to produce it. The demand for these two raw materials is constantly increasing: According to the German Raw Materials Agency (DERA), the demand for lithium-ion batteries for electric cars alone could increase by up to 33 percent by 2025. Nevertheless, a shortage of raw materials in the near future is unlikely. Experts assume that global reserves will last for about 150 years. At the same time, Volkswagen is working on three solutions to ensure a reliable supply chain in the distant future. Firstly, new deposits are being developed. Secondly, batteries will become more efficient. The energy density of lithium-ion batteries is increasing, and scientists are researching other materials that are similarly conductive. They are also working on cobalt-free battery cells. The third approach is recycling the batteries. This allows materials to be recovered and reused.

Sustainable extraction of raw materials is important for mankind and the environment. To ensure this as far as possible, Volkswagen requires its suppliers to comply with strict sustainability standards. In order to monitor this, a sustainability rating has been introduced to identify and eliminate risks in areas such as human rights, environmental protection and corruption at an early stage. Anyone who fails to comply with these standards will lose their contract in the most extreme cases.