Repsol opens the most powerful EV charging station in Europe 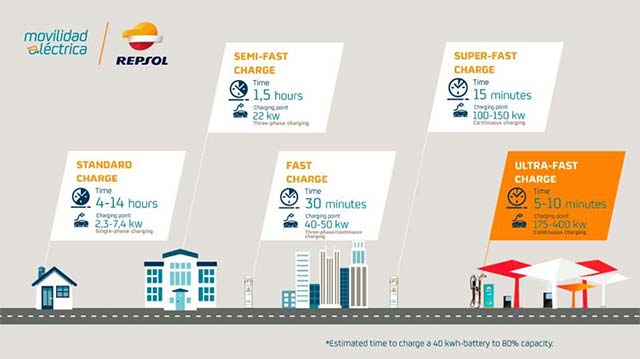 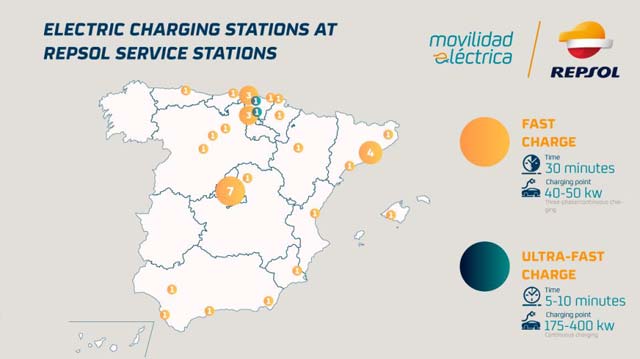 Repsol has opened the most powerful EV charging station for electric vehicles in Europe. The facility, located on the A-8 motorway at Abanto-Zierbena (Biscay), has four 400-kW terminals that enable charging of the batteries of vehicles that can support its maximum power in between five and ten minutes, a time that is comparable to that required for conventional refueling.

This charging station is at the cutting edge of electric vehicle technology, as it can supply more power than the maximum of 350 kW available until now at charging points for cars and vans in Europe. Additionally, these units guarantee optimal distribution of the available power at the facility between the four vehicles that can be connected simultaneously.

This is the second ultra-fast charging station on the Iberian Peninsula. The first began operation on 1 April on the A-1 national highway where at Lopidana (Alava), also at a Repsol service station.

The inaugural event was attended by the Chief Financial Officer of Repsol, Josu Jon Imaz; the Chairman of Ibil, Emiliano López Atxurra, the President of the Regional Council of Biscay, Unai Rementeria; the Mayor of Abanto-Zierbena, Maite Etxebarria; and the General Manager of the Basque Energy Board, Íñigo Ansola.

For Josu Jon Imaz, “this second ultra-fast EV charging point allows Repsol to continue being a leader in mobility on the Iberian Peninsula, where we already participate in the largest public electric charging network. This facility in Ugaldebieta is a clear example of Repsol’s commitment to innovation and the development of new products and services capable of meeting the needs of customers.”

Ibil, jointly owned by Repsol and the Basque Energy Board (EVE), was the company in charge of the project’s development, from the design and execution of the facility, including the associated electrical infrastructure, to operation of the system, marking an important technology milestone. In addition, the inverters and charging terminals were manufactured by Ingeteam, and the complete transformation center was supplied by Ormazabal, which means that all the technology for this facility is Spanish.

The charging terminals at the Ugaldebieta service station are remarkable not only because of their power but also because they facilitate the integration of distributed energy resources, like renewable generation and energy storage. In other words, at this station it will be possible to use solar panels and storage for a variety of purposes, such as charging electric vehicles or supplying the energy to the electrical grid that powers homes and businesses. This will make it possible to reduce or eliminate the emissions caused from generating the energy needed to power electric vehicles.

With the inauguration of this electric vehicle charging facility, unique in Europe, the Ugaldebieta service station becomes an innovation benchmark in the Iberian Peninsula’s road network.

Ugaldebieta, one of the busiest service stations in the country, has a Repsol On shop, a new store concept that offers healthy food and quality services adapted to the needs of customers, even those not needing to refuel.