Production of ID.3 at Zwickau plant to start in November 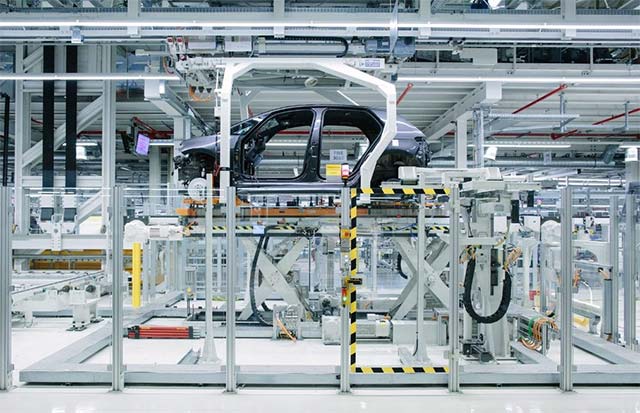 The countdown is running: series production of the ID.3 is to start at the Zwickau vehicle plant in November. Currently, the last robots are being installed and the assembly line is being commissioned.

The ID.3 is the first model in an entirely new generation of electric cars based on Volkswagen’s Modular Electric Drive toolkit (MEB). The ID.3 is making its world debut on the evening of September 9 at the International Motor Show in Frankfurt (IAA). The first vehicles are to be delivered to customers next summer.

With the ID.3, Volkswagen is launching the largest electric offensive in the automotive industry worldwide. In the next three years alone, production of a total of 33 models based on the MEB, spread across all the Volkswagen Group’s volume brands, is due to start.

“The production start of the ID. 3 in November will usher in an entirely new era for Volkswagen – comparable with the first Beetle or the first Golf. Our conversion work is proceeding entirely to schedule. The first 400 pre-series ID. 3 vehicles are already on test routes throughout Europe. With the ID.3, Zwickau will become a genuine pioneer of e-mobility,” says Thomas Ulbrich, Member of the Volkswagen brand Board of Management responsible for E-Mobility.

Comprehensive conversion of the Zwickau vehicle plant
At Zwickau, Volkswagen is converting an entire vehicle plant from 100 percent internal combustion engines to 100 percent electric vehicles for the first time. The changeover to electric vehicles already started at the beginning of 2018 and is to be completed by the end of 2020 within the space of about three years. The body shop and the paint shop have already been largely prepared for ID.3 production. The first of two final assembly lines has already been completed. It is here that production of the ID.3 will start in November; production will then be ramped up step-by-step. A total of 12 entirely new buildings or parts of buildings are currently under construction at the plant site. The existing press shop alone has already been extended and prepared for the new era for a total investment of €75 million. This means that the Zwickau plant will be able to produce all the key body parts for MEB vehicles on site from 2021.

The second assembly line at Zwickau is to be modified from the summer of 2020 and to be commissioned the same year. In the final stage of development, six models based on the MEB are to be produced at Zwickau for three Group brands from 2021. The production capacity is to be boosted from 300,000 to 330,000 vehicles per year. This will make Zwickau Europe’s largest and most efficient electric vehicle plant. All in all, Volkswagen is investing about €1.2 billion in the transformation of this location. Investments completed to date total about €800 million.

On the way to a high-tech factory
Over the past few months, more than 1,600 production robots of the latest generation have already been installed. Especially in final assembly, entirely new technologies, such as the automated installation of the roof liner, are to be used. In future, Zwickau will be able to produce about 150 cars per day more than before the transformation as a result of the growing degree of automation – 1,500 instead of 1,350. The workforce will remain largely stable.

At Zwickau, a total of 8,000 employees are preparing for the start of the electric era. In special high-voltage training, they are learning how to handle modern battery systems and electrical wiring safely and correctly. To date, about 8,000 of the total of 13,000 training days required have already been completed. More than 2,500 employees have already been qualified for e-mobility.

ID.3 celebrates world premiere at the IAA
The ID.3 is being presented to a global public for the first time at the 2019 International Motor Show (IAA) in Frankfurt. The delivery of the first vehicles is planned for the summer of 2020. Initially, vehicles will be delivered to the customers who already reserved an early production slot for the first edition of the ID.3 during the pre-booking campaign. More than 30,000 reservations have already been received.

Sep 8, 2019Blagojce Krivevski
Hybrid and electric models are the most reliable new cars in the UKStreetScooter to enter Chinese market in deal with Chery