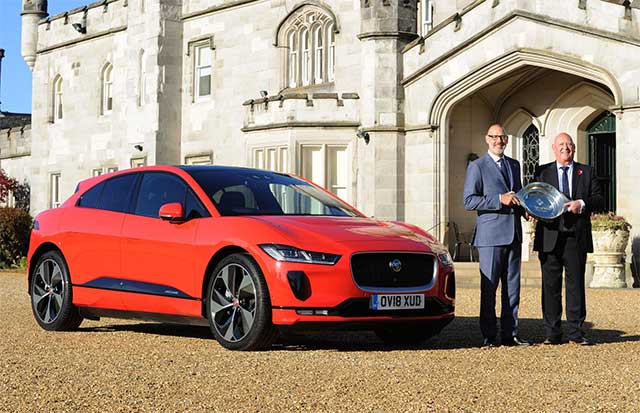 The E-PACE, Jaguar’s compact performance SUV, completed the awards trio, beating rivals to collect the Best Premium SUV title at the ceremony held at the Dalmahoy Hotel and Country Club on Friday.

This latest recognition from the Association of Scottish Motoring Writers is the fourth time Jaguar has taken home the top award and caps an incredible week for the Jaguar I-PACE after it was named as the first-ever German Car of the Year on Tuesday.

The Jaguar I-PACE has already collected 16 major honours since its worldwide reveal in March, including being named Car of the Year by the Sunday Times, Auto Express and T3 as well as being named a ‘Game Changer’ by Autocar.

The I-PACE is an all-electric performance SUV that puts Jaguar at the forefront of the electric vehicle revolution. It offers sports car performance of 0-60mph in 4.5 seconds alongside a 292-mile range (WLTP cycle), five seats and zero emissions, making it both a practical and exhilarating SUV, packed full of the latest innovations.

Jaguar’s first all-electric vehicle can achieve a 0-80 percent battery charge in 85-minutes using public DC charging (50kW) and can achieve the same state of charge in just over ten hours when home charging via an AC wall box (7kW) – ideal for overnight charging.

More than 250,000 UK customers have configured their dream I-PACE since its reveal, and more than 315,000 have visited the I-PACE website page to research it. Over 1000 test drive appointments were completed in September alone – the month UK customers started taking delivery of their new Jaguar I-PACE.

The Jaguar I-PACE, priced from £ £59,995 OTR (including government incentives), is available to order now at Jaguar UK retailers.