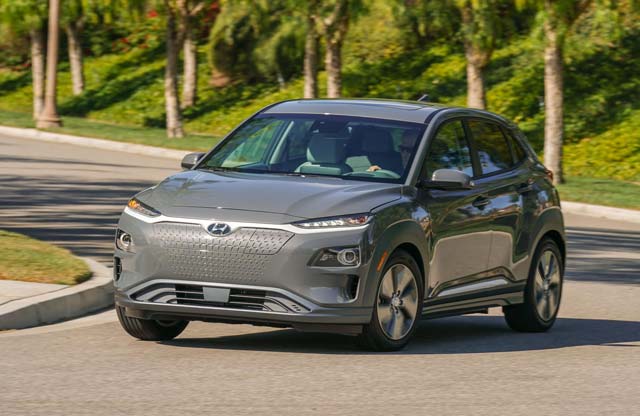 Hyundai Motor has achieved two top results in the first What Car? Real Range tests for electric cars. In the motoring magazine’s evaluation, which complements its ‘True MPG’ tests for petrol and diesel cars, the KONA Electric achieved a ‘real-world’ figure of 259 miles on a single charge – the longest driving range of any car tested.

Elsewhere, the Hyundai IONIQ Electric was also ahead of the competition, scoring the highest result for electric car efficiency, travelling 3.9 miles for every kWh of energy consumed.

The KONA Electric equipped with a 64kWh battery pack was tested by What Car? along with 13 other zero-emission cars at the Millbrook Proving Ground test track, in a mixed range of driving conditions. It achieved a real-world range of 259 miles – the equivalent of driving from London to Snowdonia on a single charge, and at a cost of just 3.3 pence per mile.

Results of the What Car? testing comes just a few months after KONA Electric was crowned ‘Affordable Electric Car of the Year 2018’ by Auto Express magazine.

IONIQ Electric scored a second success for the brand in the new Real Range tests, achieving the highest energy efficiency and lowest cost-per-mile rating of any car tested. The zero-emission IONIQ covered an impressive 3.9 miles per kWh – 11% further per unit of energy than any other model from a different brand. It achieved a ‘real-world’ range of 117 miles in the What Car? test, at a cost of just 3 pence per mile.

The KONA Electric provides all-electric zero emissions driving within a practical and stylish SUV body style. Characterised by its distinctive two-tone body, the fully-electric SUV lets buyers individualise their car with a wide range of colours. It seats five passengers in comfort and boasts a generous boot capacity of 322 litres (VDA).

The new What Car? Real Range test is the electric car equivalent of its well-known ‘True MPG’ test for combustion engine vehicles. The analysis is carried out at the Millbrook Proving Ground and incorporates a mix of town, A-road and motorway driving conditions. Testing is done with the lights on, climate control set to 22 degrees and in an ambient temperature of between 10 and 15 degrees.

[source: What Car?]
Nov 8, 2018Blagojce Krivevski
Cummins and Hyundai partner for all-electric mini excavatorOctober 2018 electrified sales in the US