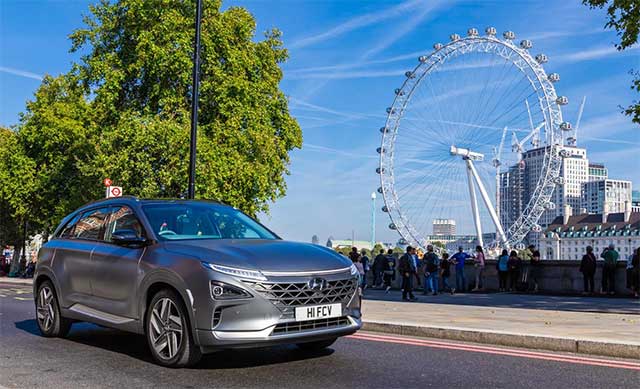 Hyundai has revealed new research which reveals that nearly one in five Brits worry about pollution on a daily basis with 74% believing they could and should do more to lead an environmentally friendly lifestyle.

This comes as Hyundai launches its brand-new next generation hydrogen fuel cell electric vehicle, NEXO as part of Clean Driving Month. The survey, of 2,000 UK adults found that when it comes to what people worry about relating to air pollution, it’s the effect it’s having on their children that features as one of the biggest (56%).

Perhaps unsurprisingly it’s Londoners (55%) who are most worried when it comes to air pollution, with those in Edinburgh (52%) second most worried and residents in Manchester just after that (50%).

In content released, Hyundai has teamed up with technology expert Georgie Barrat. Georgie interviews a family, The Devonshire’s, on their attitudes towards air pollution and what concerns them most about living and working in London.

Georgie is seen driving the NEXO along London’s dirtiest driving route, which was mapped by UCL in partnership with Hyundai, and asks the family a series of questions around air pollution; how they feel about it, and what they feel they could do to reduce their emissions.

Mum of two Julia Devonshire, whose two-year-old son Dexter features in the video, said: “When it comes to air pollution, I think about the effect it may have on my children. Luckily, they don’t have asthma or any conditions like that because I think then it would be much more concerning. However, this has made us think more about the emissions we put out as a family, and the measures we could take to reduce them.”

Georgie Barrat said: “It was really interesting listening to the Devonshire’s concerns when it comes to air pollution, and it’s understandable that parents are worried about what their children are breathing in. Hyundai’s NEXO is one of the solutions that could help address our air quality problem and it was great to see it in action. Refuelling with hydrogen was surprisingly quick and easy – just like filling up a petrol or diesel car – and it’s incredible that the only by-product is water. But what I found most impressive is how NEXO actually cleans the polluted air around it as it drives – it’s like a road hoover!”

The NEXO, which is available next year, has an advanced air purification system which filters 99.9% of very fine dust (PM2.5). The vehicle shows the exact amount of air purified on the display panel in the car each time you drive. To help Brits visualise this innovative technology, Hyundai has held a clean air demonstration which brings to life the air purification system.

When the NEXO is driven for just one hour, it approximately cleans the same amount of air pollutants that two internal combustion engine cars emit – that’s enough clean air for 42 adults to breathe for one hour.

As part of the Clean Driving activity, this weekend, selected Londoners will have the opportunity to test drive the brand-new NEXO for themselves and see how much air they can clean up on their own streets with ‘NEXO Neighbourhoods’.

The NEXO is Hyundai’s technological flagship, a stylish SUV packed full of the latest innovation in Advanced Drivers Assistance Systems and a driving range of up to 414 miles (WLTP). The hydrogen fuel cell electric vehicle emits nothing but water and can be refuelled in less than 5 minutes – similar to the time it takes to refuel a conventional diesel or petrol car.

As well as being a zero emissions vehicle, NEXO also features an adjustable regenerative braking system that recuperates additional energy when possible and significantly reduces other pollutants like brake dust.

From 2019, the new NEXO will be available to consumers starting from circa £65,000 and via selected lease companies.