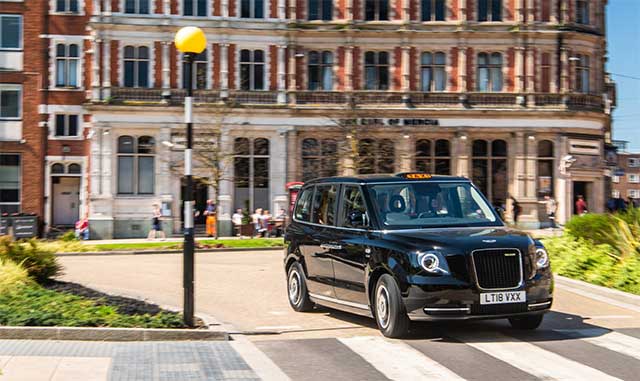 The world’s most advanced electric taxis have started appearing on the streets of Edinburgh, thanks to a deal that has been signed by the city’s Union Motor Company. As a result, these TX eCitys, which promise to dramatically cut driver’s fuel bills, will increasing appear on the capital’s roads.

The first TX was handed over to the Edinburgh cabbie, David McMillan, as part of the opening of the new dealership.

LEVC’s TX is a range-extended electric vehicle – which this means that the vehicle is only ever driven by its powerful electric motor. However, there is a small petrol engine on-board which can top-up the battery, should the driver be unable to charge. This technology will give drivers a range of up to 377 miles, and a zero emissions range of 80.6 miles.

This technology set up means that the move to electric will save drivers on average £100 a week in fuel. The PCP finance contract the vehicle will cost £177 per week, which compares with £167 per week for the outgoing diesel vehicle.

Mr McMillan, who usually covers 100 miles a day, estimates that he will save £458 per month from making the switch. Further cost savings come from service intervals that jump from 12,000 miles to 25,000 miles.

David McMillan, 67 and a cab driver of 7 years, said: “These types of vehicle are the future – promising a smoother, more comfortable ride for passengers and will help clean up cities too. The fact I will be financially better off is a big bonus too.”

Mr McMillan has always embraced the latest technological advances in the taxi trade and is currently available to hire through Gett, the global ride sharing app, which has been allowing passengers in Edinburgh to book a ride in a couple of taps in the app since 2015.

Union Motor Company, who have operated in Edinburgh for 22 years work with a variety of car brands, have been chosen by LEVC to sell and service the next taxi in the city. The business was chosen because of its commitment to the EV transition as well as its long-standing positive relationship with Edinburgh taxi trade.

The Union Motor Company have installed 2 electric charge points at both their retail sites and have employed four new members of staff to sell and service the vehicle. In addition, several staff members have undergone rigorous training to ensure they are ready to service these electric vehicles.