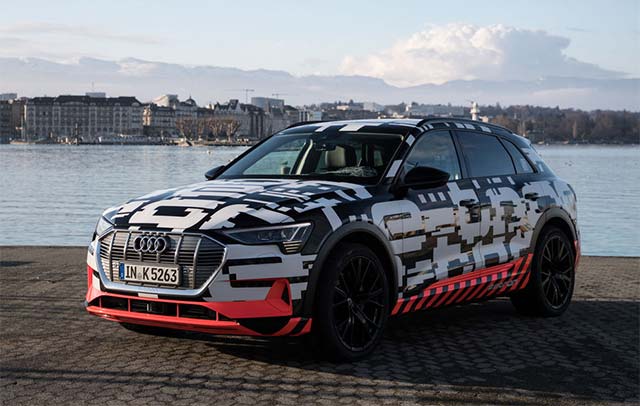 From virtual to reality in just a few mouse clicks. Audi devotees excited by the e-tron quattro concept – an SUV which is the first to carry the genes of Vorsprung durch Technik into the era of fully electric mobility – can not only now view the prototype’s recent Geneva Motor Show appearance online, but in the same browsing session can also secure priority access to the forthcoming series production version by placing a deposit.

The £1,000 deposit towards the first ever series production full EV from Audi can be placed online at audi.co.uk, where it can be accepted via the Audi Store area within the site (https://beta.audi.co.uk/e-tron.html), or it can be taken by any of the 116 Audi Centres across the country.

Depositors will be enrolled in a Priority Order Members Club which will entitle them to be the first to order the series production model. They will also benefit from regular updates on the car’s journey to production readiness, invitations to special preview events and opportunities to enter exclusive competitions. The first of these will be a prize draw to win tickets to the prestigious, invitation-only Audi Polo Challenge taking place this summer.

When the priority ordering system is activated, depositors will immediately be informed of the final UK pricing and specification position and of the options available, enabling them to submit an order via their preferred Audi Centre before the car becomes publicly available later this year. The £1,000 deposit is offset against the purchase price, and is fully refundable at any time.

Those who do proceed will take delivery of the first Audi to be built on the next generation MEB platform, one of the key cornerstones underpinning the brand’s advance towards widespread electrification of the model portfolio. More than 20 electric cars and plug-in hybrids will join the range by 2025, spread across all segments and concepts.

Produced at the Aidi e-tron manufacturing facility in Brussels, the premium SUV based on the e-tron quattro concept will offer space for five people and their luggage in accommodation that is similar to that of a typical Audi luxury class model. It will offer a driving range that is favourably comparable with a conventionally powered equivalent, and when this range is exhausted it will be 80% rechargeable in less than 30 minutes at fast-charging stations with up to 150kW capacity. With motive power to each axle it will also offer the all-weather traction advantages of ‘e-quattro’ drive.

All-wheel-drive will be invaluable to the e-tron prototype in the coming months because 250 examples are set to cover more than three million miles on four continents as part of the car’s final testing programme. This is equivalent to circumnavigating the earth 125 times, and is expected to involve around 85,000 hours on the road.

From the cold of Scandinavia and the heat of Africa through the mountainous regions of Asia and the merciless cambers of the Nurburgring to the stop-and-go traffic of major Chinese cities and American highways – the purely electrically powered SUV will have its mettle tested in uncompromising practical tests under the most extreme of conditions from below -20 to above +50 degrees Celsius. In addition, intensive tests of the charging technology are being conducted worldwide – an important safeguarding criterion for battery-electric models.