Hyundai Ioniq Plug-in Hybrid now available in the US 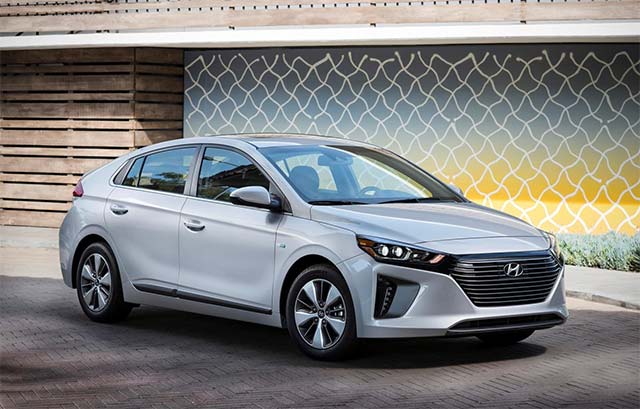 Hyundai has added the 2018 Plug-in Hybrid model to its Ioniq line-up for the 2018 model year, along with new features for Ioniq Hybrid and Electric models. The growing eco-focused Ioniq line-up is the first to offer three distinct electrified powertrains on a single, dedicated vehicle platform.

The new 2018 Ioniq Plug-in Hybrid and other models offer a sleek, aerodynamic silhouette with an industry-leading 0.24 Cd derived from carefully designed surfaces. The Ioniq employs efficiency and technology in its design to create both a unique and forward-looking appearance. Throughout the entire development phase, engineers and designers worked closely to ensure that form and function evolved simultaneously in a complementary fashion. Its fluid exterior shape and smooth air flow channels emphasize aerodynamic body lines and design forms.

The new 2018 Ioniq Plug-in Hybrid provides an all-electric range of more than 29 miles, 119 MPGe in EV mode and 52 MPG in hybrid mode based on EPA estimates, powered by a potent 8.9 kWh lithium-ion polymer battery. The Ioniq Plug-in Hybrid features a new Kappa 1.6L direct-injected Atkinson-cycle four-cylinder engine with an unsurpassed thermal efficiency of 40 percent and delivering an estimated 104 horsepower and an estimated 109 lb.-ft. of torque. This engine has been specifically tailored to the hybrid application and is combined with a quick-shifting six-speed double-clutch transmission – differentiating Ioniq from its key competitors with a more dynamic and engaging driving experience.

The Ioniq Hybrid’s electric motor delivers an estimated 32 kW (43 horsepower) with an estimated maximum torque of 125 lb.-ft., powered by a lithium-ion polymer battery with 1.56 kWh capacity. The battery is efficiently positioned under the rear passenger seats. In combination with the 1.6-liter direct-injected engine, Ioniq Hybrid offers a total system output of 139 horsepower while providing low emissions, outstanding efficiency and range. The Ioniq Hybrid Blue model has an EPA-estimated 58 MPG combined rating, the highest rating of any non-plug-in vehicle sold in the U.S. market.

The Ioniq Electric offers pure electric mobility with a 28 kWh lithium-ion polymer battery for an estimated driving range of 124 miles. The electric motor has a maximum output of 88 kW (118 horsepower) and 218 lb.-ft. of torque mated to a single-speed reduction-gear transmission. The Ioniq Electric has an EPA-estimated 136 MPGe rating, the highest efficiency rating of any electric vehicle sold in the U.S. market.

Six-speed dual-clutch transmission
The Ioniq Hybrid and Plug-in Hybrid both feature a six-speed EcoShift® dual-clutch transmission (DCT), which boasts best-in-class transfer efficiency through the use of low-friction bearings and low-viscosity transmission oil, and is able to achieve a unique mix of driving performance and fuel efficiency for a spirited and fun-to-drive character. This is an important differentiator from the majority of other Hybrid and Plug-in Hybrid cars that use a Continuously Variable Transmission, which are often criticized as having ‘rubber band-like’ acceleration.

Advanced Battery Technology
Further, the powertrain components were designed to be compact and highly efficient. The combined extra weight of the Hybrid and Plug-in Hybrid technology therefore adds minimal weight to the Ioniq, but significantly increases its efficiency. Electric power for the Hybrid and the Plug-in Hybrid, as well as for the Electric, is generated by a permanent magnet synchronous motor whose parts were optimized by reducing the thickness of core components by up to 10 percent and adopting rectangular-section copper wire to decrease core and copper loss. Hyundai uses a lithium-ion polymer battery pack for all Ioniq models which is 20 percent lighter than non-polymer lithium-ion batteries and can be shaped more optimally to the interior than standard cell format batteries. This also provides lower memory sensitivity, excellent charge and discharge efficiency, and outstanding maximum output.

Driving performance – low- to zero-emission mobility without compromise
Ioniq Hybrid and Plug-in Hybrid feature a sophisticated multi-link rear suspension system with dual lower control arms for agile ride and handling coupled with excellent ride quality. In addition, extensive use of aluminum in front and rear suspension components saves around 22 lbs. of weight compared with conventional materials. A reduction of five lbs. per front lower arm unit saves 13 lbs. at the front suspension, while nearly nine lbs. is reduced at the rear suspension.

In addition, the placement of the battery systems below the rear seats provides a lower center of gravity for more responsive handling.

Michelin tires give Ioniq enhanced levels of efficiency, as the car is fitted with low-rolling-resistance tires for 15-, 16- and 17-inch wheels, plus the car’s larger 17-inch wheels (Ioniq Hybrid Limited) are fitted with high-silica tires for better all-around performance. The multi-link suspension system of Ioniq Hybrid and Plug-in Hybrid has been adapted to work most efficiently with low-rolling-resistance tires while minimizing typical tire performance trade-offs. 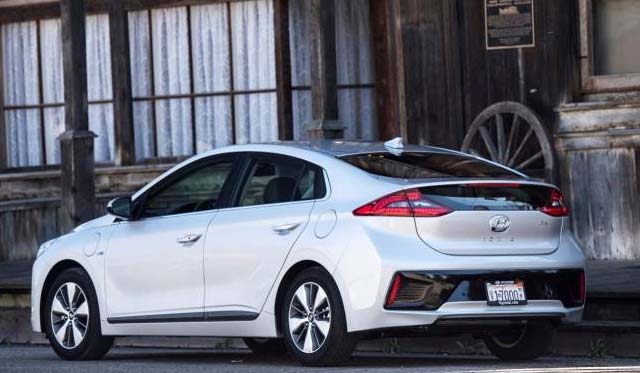 In keeping with its exterior, the interior of Ioniq captures the model’s futuristic qualities. A smooth, elegant and clutter-free theme and efficient use of interior space complements a logical, structured approach applied to the layout of controls for intuitive operation. Materials for the interior were chosen with an ecologically-sensitive focus and are used to create a simple and clean look throughout the car, giving the interior a sleek, light and purified feel.

The driver and passenger of the Electric model will also notice that there is more room between the front seats. This is achieved via a shift-by-wire push-button drive selector free of mechanical linkage. The Ioniq also features an electronic parking brake (EPB), conserving space in the center console.

Eco-focused materials create clean and sustainable interior ambience
A key characteristic of the Ioniq is its innovative use of recycled or ecologically-sensitive materials. The interior door covers are made of plastic combined with powdered wood and volcanic stone while providing the same quality appearance of typical plastic-based materials. The softer, more natural feel is achieved along with less reliance on oil-based products. This approach extends to other areas of the car as well. Raw materials extracted from sugar cane are partly applied on the headliner and carpet. Paint with renewable ingredients extracted from soybean oil is used to achieve lustrous metallic colors on key components.

Infotainment System
To suit customers’ varied lifestyles,  Ioniq features state-of-the-art infotainment and connectivity features. Ioniq is equipped with a high-definition 7-inch TFT information cluster. With a resolution of 1280 x 720 pixels, it displays all gauge functions (speedometer, drive mode, fuel level). Depending on the selected drive mode, background color and gauges are adapted to always provide the most important and useful information. Within SPORT mode, the display changes into a revolving digital speedometer that is surrounded by an analog-type tachometer, showing engine rpm in red. When choosing ECO mode, the TFT-information cluster simulates the classic speedometer needle.

The driving experience inside Ioniq is enhanced through state-of-the art connectivity features like Apple CarPlay®, Android Auto® and Blue Link®, as well as wireless charging for smartphones. Even more, the 7-inch TFT instrument cluster displays all key driver information with outstanding resolution. Ioniq also allows drivers to integrate their smartphone with the vehicle’s infotainment system by providing both Apple CarPlay® and Android Auto®. Both systems enable users to connect their devices to activate music, telephone or navigation functions with lower distraction levels. Ioniq also offers a wireless inductive-charging pad compatible with both Android- and Apple-based smartphone technologies.

Blue Link
For 2018 Ioniq models equipped with Blue Link, complimentary three-year Blue Link services, with enhanced safety, diagnostic, remote and guidance services. Blue Link brings connectivity directly into the car with technologies like Remote Start with Climate Control, Destination Search powered by Google®, Remote Door Lock/Unlock, Car Finder, Enhanced Roadside Assistance, and Stolen Vehicle Recovery. Blue Link features can be accessed via buttons on the rearview mirror, the MyHyundai.com web portal, via the Blue Link smartphone app and now through the Amazon® Alexa Blue Link skill. Some features can also be controlled via Android Wear™ and Apple Watch™ smartwatch apps. Owners of Ioniq Plug-in Hybrid and Electric will also be able manage and monitor their car’s charging schedule remotely via the Blue Link® smartphone app or simply ask Alexa to start and stop charging as needed. This capability to schedule charging is ideal for individuals that experience lower electricity rates during off-peak hours, offering a high level of both convenience and cost efficiency.

Ioniq’s light-yet-rigid body is the result of advanced design, construction methods and materials. Featuring more than 50 percent Advanced High Strength Steel, the chassis benefits from superior rigidity for responsive handling and safety, with high impact-energy absorption and minimized cabin distortion to protect passengers in the event of a collision. This rigid structure also leverages 476 feet of advanced structural adhesives in its design, simultaneously yielding both lightweighting and rigidity benefits.

Ioniq offers the very latest in advanced safety, including Automatic Emergency Braking with Pedestrian Detection, Lane Departure Warning with Lane Keep Assist function, Blind Spot Detection and Rear Cross-Traffic Alert, for high levels of both active and passive vehicle safety. These electronic systems are class-leading as Ioniq continues to break the mold for alternative fuel vehicle safety standards. Blind Spot Detection works with Lane Change Assist and Rear Cross-Traffic Alert to warn the driver of any surrounding vehicles, passengers or objects that could lead to a collision. Lane Departure Warning (LDW) with Lane Keep Assist sounds an alarm as the car moves over lane lines if the driver did not signal for an intended lane change and helps keep drivers in their intended lane with small steering corrections. Additional safety features include rear parking sensors and headlights with Dynamic Bending Light (DBL).

The Ioniq is also fitted with Automatic Emergency Braking (AEB) with Pedestrian Detection, an advanced active safety feature that alerts drivers to emergency situations, even braking automatically as required. With sensor-fusion technology that utilizes the front radar and camera sensors, AEB operates in three stages. Initially warning the driver visually and acoustically, it controls the brake according to the collision danger stage, applying maximum braking immediately before an imminent collision. When a vehicle or pedestrian is sensed in front of the car, the system is activated, operating at speeds of more than 5 mph, and minimizes damage when a collision is otherwise unavoidable.

A Tire Pressure Monitoring System also helps ensure each individual tire is properly inflated. A total of seven airbags, including a knee airbag for the driver, help protect the vehicle’s occupants in the event of a collision. Body structure improvements, complemented by a high-strength fiber-reinforced rear bumper fascia make the entire Ioniq line-up strong and durable in the event of a crash.

Hyundai is also working with ChargePoint to further enhance the Ioniq Electric and Plug-in Hybrid ownership experience. ChargePoint has the world’s largest electric vehicle charging network with more than 32,000 locations at which to charge, including more than 400 Express DC fast-charging sites. ChargePoint locations are rapidly expanding, with customer ease of use as a primary goal at every location.

Ioniq owners will receive welcome kits, informing them with key information and benefits in the use of the ChargePoint charging network, and ChargePoint access cards that are easy to activate. In addition, owners will have the capability to conveniently locate ChargePoint chargers on their mobile devices using the MyHyundai/Blue Link app.