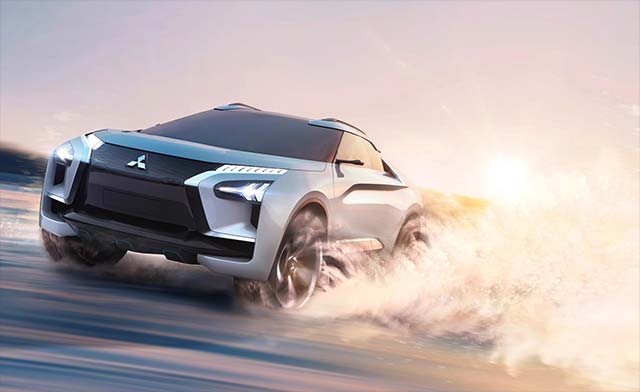 The all-new the Mitsubishi e-EVOLUTION Concept made its world debut at the 2017 Tokyo Motor Show. The all-electric, high-performance SUV embodies MMC’s new brand strategy under the new “Drive your Ambition” global tagline, a strategy that reflects an adventurous and progressive mindset for inspirational design and product.

The Mitsubishi e-EVOLUTION Concept is a technical prototype to illustrate the strategic directions of a renewed MMC brand, incorporating the strengths of the SUV and EV with the ability to integrate new systems for a connected mobility customer experience.

Under this new ethos, Mitsubishi leverages its renowned pedigree of driving performance and reliability with breakthrough SUVs and crossovers. As a pioneer of electric vehicles, MMC will expand and accelerate its EV deployment, pushing the technological envelope with a tightly integrated system of artificial intelligence, connectivity and on-board and cloud computing. 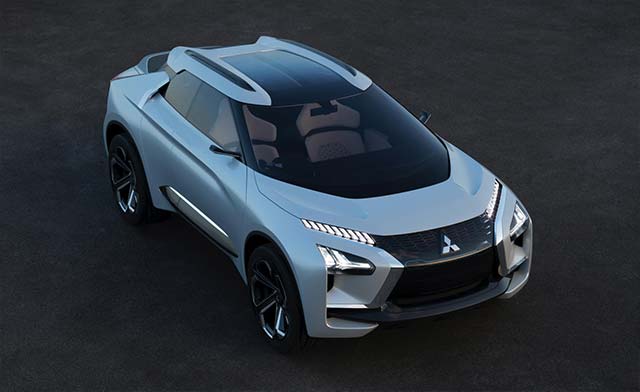 Mitsubishi has adopted a design philosophy under the title “Robust & Ingenious”.

“We aim to provide vehicles that fulfill our customers’ desires through outstanding design, combined with the power, authenticity and carefully-considered functionality Mitsubishi is known for,” said Head of Global Design Tsunehiro Kunimoto.

Robust & ingenious, the design language of the Mitsubishi e-EVOLUTION Concept, is a study in contrasts. Mitsubishi vehicles of the future will be genuinely tough and functional, but also clever, resourceful, style-setting and technologically advanced.

Mitsubishi has a long and strong heritage: When someone thinks of Mitsubishi Motors they are also reminded of its proven off-road performance and superior 4WD control. Now, the banner of superior, high-performance, 4WD control is carried forward by the Mitsubishi e-EVOLUTION Concept. The design expresses a readiness to grip the ground with all four wheels as well as the agility of a high-performance, cross-country machine.

The face of the Mitsubishi e-EVOLUTION Concept is a fresh take on MMC’s DYNAMIC SHIELD design although in this instance the black grille sits behind a glass cover, accentuated by blue lines, which also protects the advanced cameras and sensors required for its advanced driving technology. Large air intakes are located beneath the headlamps to direct cooling air to the electric brake calipers, while a sharply slanted front windshield and short overhangs give the Mitsubishi e-EVOLUTION Concept a unique side profile that is only possible with the advent of electric propulsion.

High ground clearance, short overhangs, strong shoulders and narrow hips project nimbleness and agility, while muscular tyres protrude at the four corners to communicate its powerful 4WD traction. Bars running from front to rear along either side of the roof enhance the vehicle’s muscular attitude, while air drawn-in past the C-pillar jet tailfins exits on either side of the rear bumper to aid the vehicle’s excellent aerodynamics.

The large hexagon shape at the rear draws inspiration from the spare tyre cover of the legendary Mitsubishi Shogun, one of the icons of MMC’s heritage and a stalwart of off-road driving. 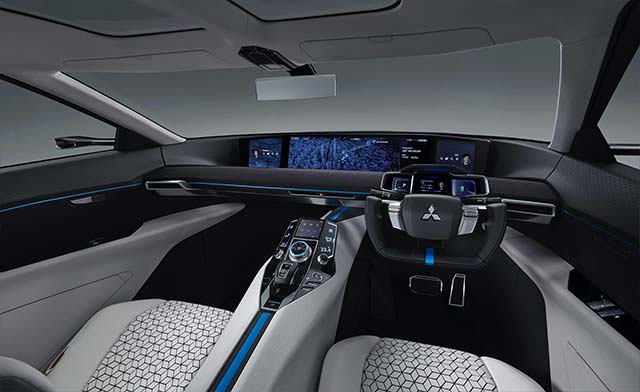 Inside, the cockpit of the Mitsubishi e-EVOLUTION Concept gives a glimpse of what’s possible when the traditional firewall is dispensed with. Its instrument panel appears to float in front of the driver, adopting MMC’s trademark horizontal styling with the focus on information above the axis and on operation below. Acting like a level in an electronic viewfinder, the horizontal instrument panel makes it easier to sense the attitude of the vehicle while driving.

A large flat screen spans the full width of the dashboard displaying environmental conditions, navigation and coaching information. The large screen is flanked by two smaller screens, showing images from front and rear cameras, while panoramic glazing provides a near unobstructed 360-degree visibility for a feeling more akin to a jet fighter than a car. 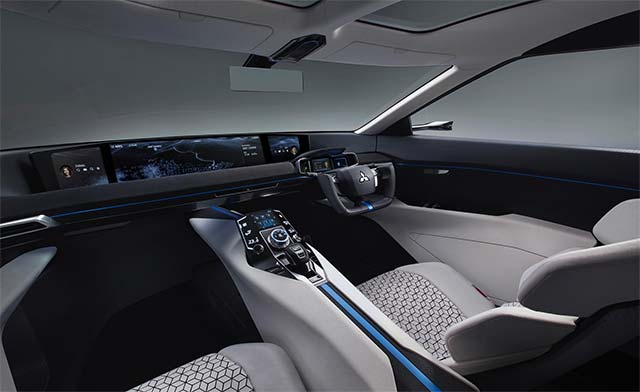 The technologies of the Mitsubishi e-EVOLUTION Concept

– EV system: The Mitsubishi e-EVOLUTION Concept uses high-performance electric motors, fed by a high-capacity battery system, to deliver the smooth, torque-rich responsiveness that is the trademark of EVs compared to petrol-powered vehicles. The drive battery is located under the floor mid-ship of the vehicle, providing a low centre of gravity for improved driving stability.

– 4WD system: For exceptional driving performance, the triple motor 4WD system employs a single motor to drive the front wheels complemented by a new Dual-Motor Active Yaw Control (AYC) system that couples two rear motors through an electronically controlled torque-vectoring AYC unit. All of this is integrated into MMC’s unique Super All-Wheel Control (S-AWC) vehicle dynamic control system to greatly improve its cornering and traction performance. The brakes of the Mitsubishi e-EVOLUTION Concept responsively and precisely control the driving forces with the help of electric callipers that supersede conventional hydraulic brakes. The effects of the system can be felt and appreciated immediately, even at low speeds when G-forces are low. Whether driving around town, on motorways or winding roads, the fully electric vehicle always provides crisp and nimble handling that faithfully mirrors driver intent.

– AI system: The brain of the Mitsubishi e-EVOLUTION Concept is an Artificial Intelligence (AI) system that augments the driver’s capabilities. An array of sensors allows the AI system to instantly read changes in road and traffic conditions, as well as the driver’s intent. Seamlessly coordinating driver intent with vehicle performance, the system supports drivers of all abilities. By making it easier and safer to control the vehicle, the motoring experience is brought to a new level. A special coaching function allows the AI system to transfer knowledge to the driver and to unobtrusively enhance their driving expertise. After building a picture of the driver’s skill level, the system constructs a training program that provides advice through voice prompts and the large dashboard display. As a result, drivers of all abilities quickly experience a vehicle that behaves the way they want it, and soon they find themselves enjoying the driving experience to an even greater degree.