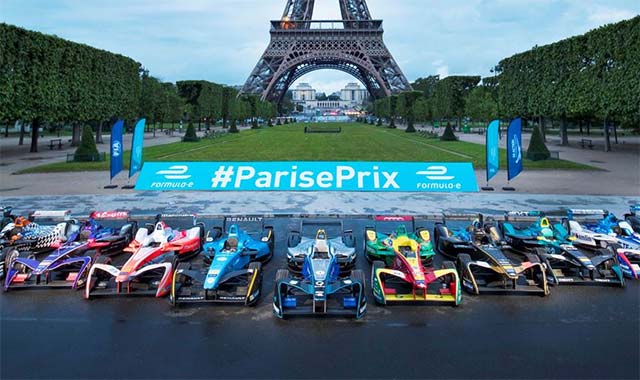 Formula E – the electric street racing series – arrives in the French capital for the Qatar Airways Paris ePrix ahead of round six of the 2016/17 FIA Formula E Championship on Saturday, May 20.

Following the second edition of the event held around the architectural complex of Les Invalides, Formula E is donating a zero-emissions glycerine generator to boost charging infrastructure and leave a lasting legacy for the city of Paris.

By bringing the FIA Formula E Championship to the streets of the French capital, Mayor of Paris Anne Hidalgo aims to increase public awareness of sustainable methods of transportation and promote car manufacturers continuing to invest in electric mobility and alternative energy solutions.

This is in line with the vision of Alejandro Agag, Founder & CEO of Formula E, who wants to make the switch to electric cars make sense for consumers – more efficient and more affordable.

The original concept was initiated by FIA President Jean Todt as a means to demonstrate the potential and drive the development of sustainable technologies, becoming a platform to increase global uptake of electric vehicles and contribute to the fight against climate change and inner-city air pollution.

Formula E and event organisers have decided to donate a zero-emissions glycerine generator to Paris after the chequered flag falls on Saturday.

The generators are based on standard production diesel engines that have been adapted with Aquafuel’s patented technology to run on glycerine. The fuel itself is a by-product of the bio-diesel production process, and it’s so clean you can drink it.

The generator will be entirely automated and can be synchronised to the French grid to feedback any energy production surplus. It will be tailor-made for the needs of Paris, and will be delivered in August 2017.