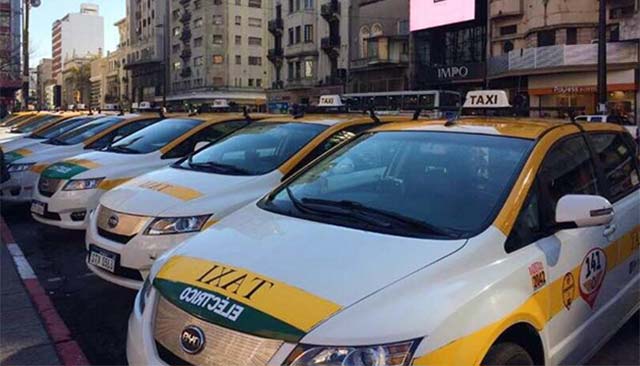 The BYD pure electric taxi fleet was launched in 2015, as the country’s pioneering initiative towards electrified public transportation.

BYD delivered the country’s first e-taxi fleet in 2015. UTE Company assessed on the vehicle’s operation and track record, which demonstrated that the e6 operational cost is 6-8 times lower than that of a traditional gasoline taxi.

The Uruguayan government is very supportive of electrified transportation. To ensure the country’s sustainable development, the government offers unprecedented subsidies and advantages to potential buyers: 60,000 USD subsidy for a pure electric taxi license, which is 50% less as compared to a conventional taxi; owners will also be exempted of the 23% import tax on the vehicles; as well as a 5,000 USD subsidy for installing the charger, totaling up to 100,000 USD in incentives.

Given the great importance Uruguay places in sustainable development, the country aims at achieving a substantial zero emission transportation system. This is a very good opportunity for BYD to develop the Uruguayan market and make a sound contribution to the country’s environment and quality of life of its population.

The launch ceremony of this latest addition was witnessed by Minister of Industry, Energy and Mining, Eng. Carolina Cosse, the Mayor of Montevideo, Eng. Daniel Martinez and the President of UTE, Dr. Gonzalo Casaravilla.

The mayor of Montevideo, Eng. Daniel Martinez spoke highly of the BYD e6 and expressed satisfaction with its performance. He believes “Electricfied Transportation is the Future”. Last Feburay, he became the first mayor in Latin America to have an electric vehicle as an official car. The BYD e6 was delivered to Mr. Martinez with a license plate number reserved for the city’s top official – “SIM 1”. Recently, he announced the addition of 20 units of the e6 to the city’s current BYD fleet.