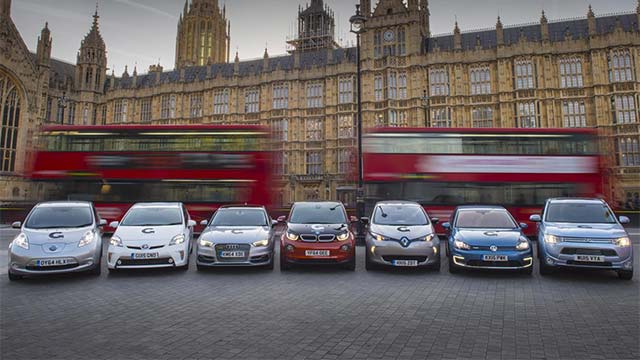 By mid-2017, government and industry body Go Ultra Low says more than 100,000 plug-in cars will be on UK roads. This landmark prospect is fuelled by record electric car registrations in 2016, a year in which volumes rose 29% on the previous 12 months.

From January to December, motorists flocked to buy electric vehicles in record numbers, with 36,907 electric vehicles registed in the UK. As thousands of motorists switched-on to the cost saving and convenience of electric motoring, public and business appetite for plug-in hybrid and pure electric cars reached a new high.

An ever-increasing selection of electric cars is playing a key role in plug-in vehicle uptake surpassing record levels, Go Ultra Low suggests. Today, more than 35 plug-in models are available to UK motorists – four times the number on the market just five years ago – with yet more new versions set to be launched this year.

Plug-in hybrid uptake was particularly strong in 2016 as annual registrations rose 41.9%, with in-demand models such as the BMW 330e, Volkswagen Golf GTE and Audi A3 Sportback e-tron among the most popular. Every quarter in 2016 produced a year-on-year improvement, while the accumulative registrations total for all electrically powered cars now rests at 87,158.

The broad variety of hybrid and pure electric cars on the market is a marked improvement on the eight electric models available to drivers in 2011 when government introduced the Plug-in Car Grant. The range of products now extends to more than 20 pure electric and 15 hybrid vehicles, from city cars and SUVs to sports cars and family hatchbacks.

Poppy Welch, Head of Go Ultra Low, said: “Year after year, we see record levels of electric vehicle registrations as more and more motorists realise the cost-saving and environmental benefits of driving a plug-in electric car. With ongoing government incentives and increasing product choice we expect this trend to contiue, boosting the number of electric cars on UK roads beyond 100,000 by mid-2017.”