California Leads Emerging EV Market, but Some Automakers Are Lagging Behind 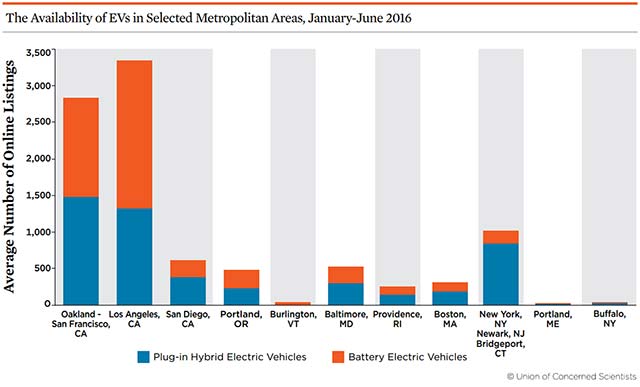 Drivers looking to take advantage of the many benefits of driving electric are up against a real barrier: automakers just aren’t bringing enough electric vehicles to market. That’s the finding of a new analysis by the Union of Concerned Scientists(UCS).

While automakers vary widely in terms of how many electric vehicle models they offer and where they sell them, all automakers could be doing more to take full advantage of the potential EV market, especially outside of California.

The new study, “Electrifying the Vehicle Market: Evaluating Automaker Leaders and Laggards in the United States,” evaluates efforts by major automakers to bring plug-in vehicles to markets across the Northeast and West Coast by examining sales, model offerings and availability on dealer lots. More than half of U.S. electric vehicle sales are in California, with 22 models available in 2015, but in other states, most EV models are difficult to find, or not available at all.

California’s relative success in deploying electric vehicles has been underpinned by the Zero Emission Vehicle (ZEV) program, which has compelled manufacturers to bring electric vehicles to market. Keeping up momentum on vehicle electrification will require updating the ZEV program to reflect technology advances that have occurred in the past few years and to ensure the state is on pace toward Gov. Jerry Brown’s goal of 1.5 million EVs on the road by 2025. 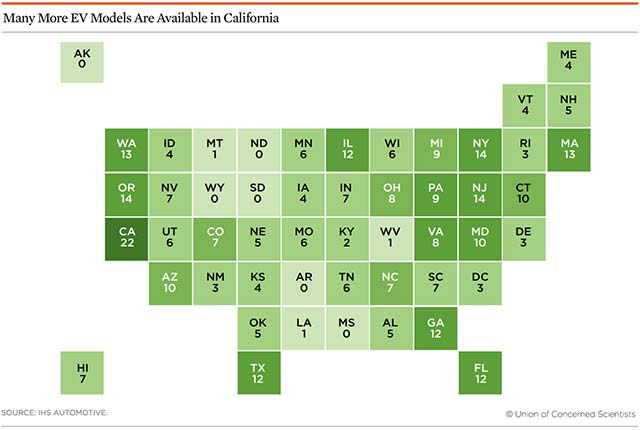 BMW, GM, Nissan and Tesla are doing better at making electric options available, with the largest percentage of plug-in sales and efforts at making the vehicles available nationwide. In 2015, BMW was second only to Tesla (which only sells plug-in vehicles); plug-ins made up 3 percent of its nationwide vehicle sales and 7 percent of sales in California. GM and Nissan were early leaders in the market with the Volt and LEAF the top selling plug-in hybrid and battery electric vehicle since 2010.

Automakers behind the curve include Toyota, Fiat Chrysler, Hyundai/Kia and Honda, who have been slower to bring plug-in vehicles to market, or have limited vehicle production or availability. Toyota had some success with a plug-in version of its popular Prius model, but currently has no plug-in vehicle on the market. Fiat Chrysler has had success in selling its Fiat 500e plug-in model in Oregon and California, but does not offer the vehicle for sale in other markets. And Honda has only offered plug-in models in very limited numbers over the past several years, with total sales since 2011 lower than GM’s EV sales in a single month.

While most automakers focus on the market for electric vehicles in California, consumers in the Northeast are missing out, with fewer models to choose from and fewer vehicles available on the lot. Even when plug-in models are available in the regional market, finding one at a dealership is a challenge. For example, in the first 6 months of 2016, Edmunds.com showed on average over 2,800 EVs for sale in the Oakland/San Francisco area, but only 317 in the Boston area.

A recent UCS and Consumers Union survey of driving habits and vehicles needs indicated that the electric vehicle technology of today can meet the needs for millions of drivers. The survey found that more than 40 percent of drivers both in California and the Northeast could use an electric vehicle today, without changing their driving habits, and strong majorities of respondents expressed interest in electric vehicles and want manufacturers to offer more electric models. The survey also found that over 85 percent of consumers would not buy a vehicle without test driving it.

The other key policy supporting consumer adoption in California has been the state’s robust vehicle incentive program, which has recently been put on hold because legislators have not yet approved cap-and-trade expenditures. Given that the survey results showed little awareness of incentive programs, outreach and education, in addition to stable funding, are important for continuing to expand the market for electric drive, according to UCS.

Research by UCS experts shows that electric vehicles produce less than half the global warming emissions of comparable gasoline vehicles.