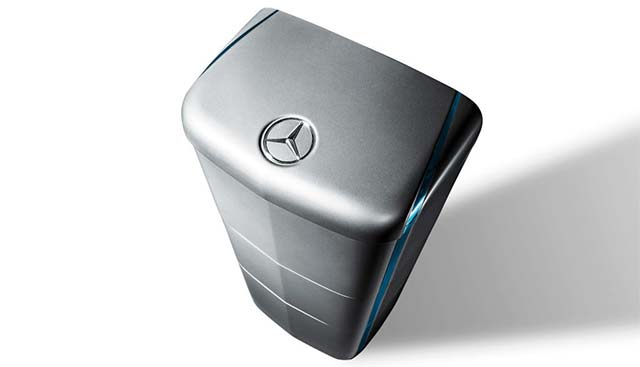 Daimler AG has established Mercedes-Benz Energy GmbH to take over the development and global sale of Mercedes-Benz brand stationary energy storage. The production of the systems remains the core expertise of Daimler’s other wholly owned subsidiary, Deutsche ACCUMOTIVE GmbH.

Daimler AG with its wholly owned subsidiary Deutsche ACCUMOTIVE began delivery of domestic storage solutions for the German market in April. Work also started on setting up the first large-scale industrial projects in the field of primary regulation energy.

With the establishment of Mercedes-Benz Energy GmbH based in Kamenz/Saxony, the company is now taking another step toward expanding the stationary storage business. “International expansion and collaboration with further partners are particularly high on the agenda,” Daimler said.

ACCUMOTIVE will produce both the stationary and automotive storage systems. The development, sale and installation of stationary applications are the responsibility of Mercedes-Benz Energy. The partnership promises more rapid growth for both lines of business.

Establishing a separate entity provides greater flexibility for the stationary storage business. This is particularly advantageous when it comes to contact with customers, since the customer base for Mercedes-Benz energy storage solutions is very diverse in comparison to the automotive division. It ranges from private households to large-scale industry.

Following the recent announcement of a doubling in production floor space with an investment of EUR 500 million, Daimler AG’s battery facility in Kamenz is now being reinforced further still. In addition to the production facilities of ACCUMOTIVE, Mercedes-Benz Energy will now also be based at the location in Saxony which was opened in 2010. A total of 330 people are currently employed at the Kamenz facility. Mercedes-Benz Energy is starting with 50 employees, and wants to increase this figure to 100 as soon as the end of 2016. The plan is to double the workforce again to 200 by the end of 2017. The management of the company is being assumed on 1st July 2016 by Marcus Thomas, who has many years of experience in the field of conventional and alternative drive systems at Daimler AG.

In addition to constantly expanding the Kamenz facility, Daimler AG is aiming to achieve strong partnerships within the group and with external parties. The company works with partners such as the energy provider Energie Baden-Württemberg (EnBW), the solar energy specialist SMA and certain wholesalers in order to sell the domestic storage systems in Germany. A strong network is also already in place in the field of industrial applications.

A joint venture between Daimler AG, The Mobility House AG and GETEC will soon operate the world’s largest 2nd use battery storage facility and market its services on the German primary regulation energy exchange. The partners in the joint venture are also receiving support from the recycling specialist Remondis GmbH. Daimler AG is also in a project-based partnership with the energy provider enercity (Stadtwerke Hannover AG).

As a next step, Mercedes-Benz Energy GmbH will also start selling its battery storage products at an international level. For the development and sale of the storage systems, the company relies on a strong partnership with Mercedes-Benz entities in other countries including the think tank Mercedes-Benz Research & Development North America in Silicon Valley, California.

Developed for the demanding use in the vehicle, the Mercedes-Benz energy storage units meet the highest safety and quality requirements. They are based on the same technology that Daimler has already used around 75,000 times in electric and hybrid vehicles since 2012.

Up to eight battery modules with an energy content of 2.5 kWh each can be combined into an energy storage system with up to 20 kWh. Scalability is many times greater in the field of industrial applications.