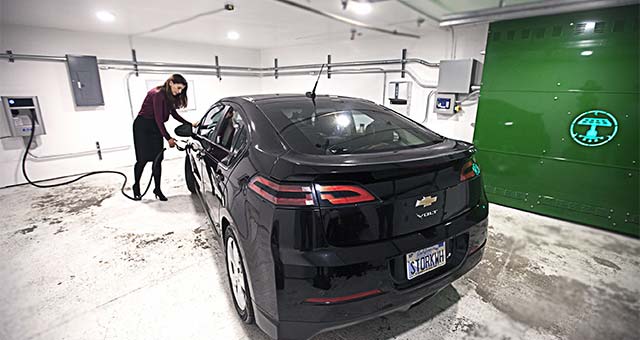 Researchers at Carnegie Mellon University find that while charging electric vehicles at night is more cost-effective, it increases air emissions.

Charging electric vehicles late at night, when demand is low and electricity is cheapest to generate, is preferred by grid operators. However, CMU researchers found that it produces substantially higher greenhouse gas emissions and air pollution than simply charging as soon as the driver returns home.

In a study published this week in the journal Environmental Research Letters, Jeremy Michalek, a professor of engineering and public policy and mechanical engineering, and his colleagues modeled the PJM region, which includes Washington, D.C., Philadelphia, Pittsburgh, Cincinnati and Chicago.

“We looked at how power plant operations would change in response to electric vehicle charging load, and we modeled emissions from those plants and their downwind air pollution consequences for human health and the environment,” Michalek explained. “We found that charging late at night reduces power generation costs by a quarter to a third, largely by shifting to cheaper coal-fired power plants. But the extra emissions released as a result can cause 50 percent higher costs to human health and the environment.”

According to the study, coal-fired power plants often operate below full capacity at night, so they are available to be dispatched in response to new nighttime load, like electric vehicle charging. These coal-fired power plants produce sulfur dioxide, which is the largest single source of cost to human health resulting from electric vehicle charging.

In a separate study, published in the journal Environmental Science & Technology, Michalek and colleagues looked at greenhouse gas emissions from electric vehicle charging across the United States.

Michalek said the picture could change in the future, as many coal-fired power plants are expected to retire in response to recent regulation.

“As coal is phased out and the grid becomes cleaner, the emissions implications of charging at night will be mitigated,” he said, “and the benefits of late-night charging for the electricity grid may be good reasons to delay charging.”

Last week’s Supreme Court decision to halt the Clean Power Plan while it undergoes litigation could delay the shift away from coal, according to Michalek.

“For now, if you live in a coal-heavy region like the Chicago, Washington, D.C., Philadelphia area, delaying charging until late at night can cause more harm than good.”

Feb 24, 2016Blagojce Krivevski
Production-ready Rimac Concept_One to be Unveiled in GenevaHonda Plans for Two-Thirds of its Cars to Be Electrified by 2030