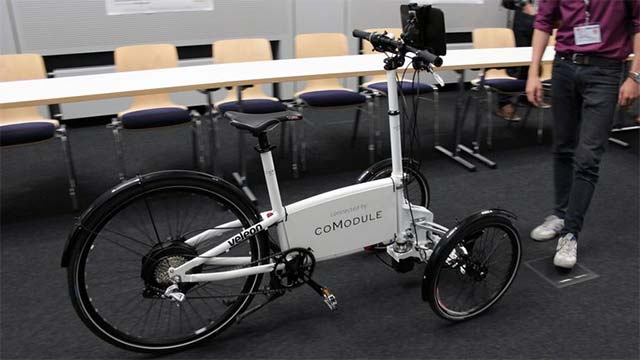 Move over, self-driving cars – your two-wheeled equivalents are overtaking around the outside. With companies ranging from Google to Volkswagen trying to perfect the former, coModule, a Berlin-based electromobility company, unveiled a prototype of a fully autonomous e-bike at the Eurobike 2015 in Germany.

Based around an existing electric cargo bike, coModule’s prototype is fully controllable via smartphone, with users able to accelerate, turn and brake the bike by tilting their device – creating an interesting hybrid of mobile game and remote-controlled car.

With only a few more additions – such as programming GPS coordinates – the bike is able to be driven completely autonomously in a closed environment. It uses the same Heinzmann electric motor which also powers the e-bike fleet of German postal company Deutsche Post, and is based on a Veleon electric cargo bike.

With the launch of the prototype, coModule is joining the likes of Baidu and Ford, both of which are said to be working on their own autonomous e-bike technology.

coModule was accelerated in 2014 by Startupbootcamp and its partners (Bosch, Cisco, EnBW, Here, Mercedes-Benz, Castrol and Siemens) and is supported by TU Berlin through the Climate KIC program. In addition, coModule belongs to the portfolio of leading German technology investor, High-Tech Gründerfonds.