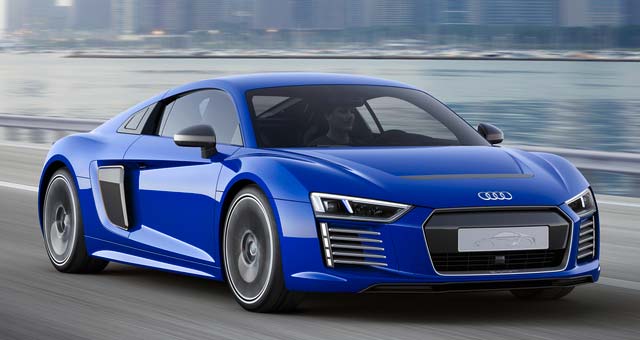 Audi has demonstrated its commitment to autonomous driving technology with the unveiling of the R8 e-tron piloted driving concept at the Consumer Electronics Show (CES) in Shanghai.

The Audi R8 e-tron is third autonomous concept vehicle following experiments with the RS7 and A7.

The Audi R8 e-tron piloted driving concept car is based on the multimaterial Space Frame of the new production R8. A rear car body module made of carbon fiber reinforced polymer (CFRP) integrates the luggage compartment, which extends the frame structure. The walls of the luggage compartment shell are corrugated, so that they can absorb extreme amounts of energy with little material weight in case of a rear-end collision. Thanks to specific modifications made to the outer shell and wheels, the Audi R8 e-tron piloted driving attains a low Cd value of 0.28. Its front end and sideblades feature e-tron specific lighting solutions.

The T-shaped battery is structurally integrated into the center tunnel and behind the occupant cell – its low center of gravity further boosts the already excellent driving dynamics of the R8 e-tron piloted driving. The high-voltage battery is based on a new lithium-ion technology that has, for the first time, been specifically designed for the drive system of an all-electric vehicle. Compared to the first technology platform, the battery’s energy capacity has grown from 49 kWh to approximately 92 kWh. Optimized space utilization and improved battery cell technology enabled this progress without requiring package modifications. Audi produces the high-voltage battery itself.

Audi says it will be “introducing technologies into production which will handle the task of driving in certain situations, at the request of the driver” in the next two years.

The concept is packed with a lot of tech features, such as a vast number of sensors, laser scanners and video cameras, enabling it to drive without direct driver input. Data from all of these sources is then sent to a central computer within the car which creates a virtual picture of the car’s environment.

The first series production model from Audi to feature such autonomous tech will be the next-generation A8, due in 2017.[wzslider height=”400″ lightbox=”true”]