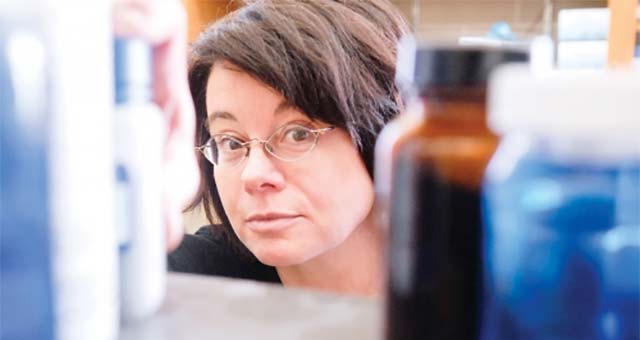 An ultra-thin nanomaterial is at the heart of a major breakthrough by Waterloo scientists who are in a global race to invent a cheaper, lighter and more powerful rechargeable battery for electric vehicles.

Chemistry Professor Linda Nazar and her research team in the Faculty of Science at the University of Waterloo have announced a breakthrough in lithium-sulphur battery technology in a recent issue of Nature Communications.

Their discovery of a material that maintains a rechargable sulphur cathode helps to overcome a primary hurdle to building a lithium-sulphur (Li-S) battery. Such a battery can theoretically power an electric car three times further than current lithium-ion batteries for the same weight – at much lower cost.

Nazar’s group is best known for their 2009 Nature Materials paper demonstrating the feasibility of a Li-S battery using nanomaterials. In theory, sulphur can provide a competitive cathode material to lithium cobalt oxide in current lithium-ion cells.

Sulphur as a battery material is extremely abundant, relatively light, and very cheap.Unfortunately, the sulphur cathode exhausts itself after only a few cycles because the sulphur dissolves into the electrolyte solution as it’s reduced by incoming electrons to form polysulphides.

Nazar’s group originally thought that porous carbons or graphenes could stabilize the polysulphides by physically trapping them. But in an unexpected twist, they discovered metal oxides could be the key.

While the researchers found since then that nanosheets of manganese dioxide (MnO2) work even better than titanium oxides, their main goal in this paper was to clarify the mechanism at work.

“You have to focus on the a fundamental understanding of the phenomenon before you can develop new, advanced materials,” saidNazar.

They found that the oxygenated surface of the ultrathin MnO2 nanosheetchemically recycles the sulphides in a two-step process involving a surface-bound intermediate, polythiosulfate. The result is a high-performance cathode that can recharge more than 2000 cycles.

The surface reaction is similar to the chemical process behindWackenroder’s Solution discovered in 1845 during a golden age of German sulfur chemistry.

“Very few researchers study or even teach sulphur chemistry anymore,” said Nazar. “It’s ironic we had to look so far back in the literature to understand something that may so radically change our future.”

BASF International Scientific Network for Electrochemistry and Batteries funded the research. The paper’s co-authors include Arnd Garsuch and Thomas Weiss of BASF.

Professor Nazar will present on the promise and reality of lithium-sulfur batteries at the American Association for the Advancement of Science (AAAS) Annual Conference on Saturday, February 14, 2015 in room 230Bin the San Jose Convention Center.