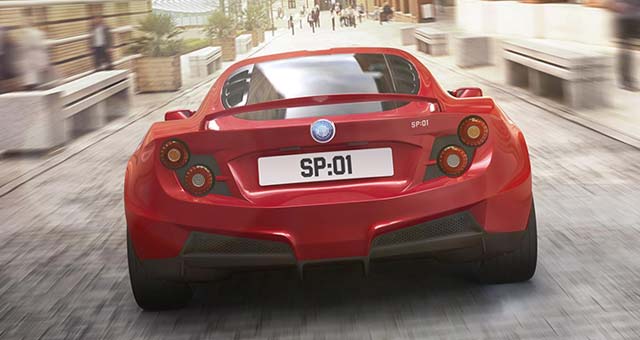 The final exterior design of Detroit Electric’s all-new, pure electric two-seater sports car, the SP:01, is revealed today as the company gears up for production.

The lightweight, limited-edition SP:01 will be the world’s fastest production electric sports car when it goes on sale in Asia, Europe and North America, starting in 2015.

Revealed as a prototype at the 2013 Shanghai Motor Show, the design of SP:01 has been subtly updated to further improve the vehicle’s aerodynamic performance, ahead of the start of production at a new facility in the UK later this year.

The most striking element of the design is the bold new fastback configuration, which replaces the prototype’s flying buttresses on either side of the rear window. The exterior design has been optimised using computational fluid dynamics (CFD) analysis to provide enhanced airflow and reduce turbulence, for maximum performance and stability.

A large sculptural rear wing and an under-body diffuser have been incorporated to reduce lift and improve downforce at higher speeds. The changes to the production vehicle’s aerodynamics are intended to deliver improved on-the-limit road-holding and ensure rewarding and accessible dynamics. 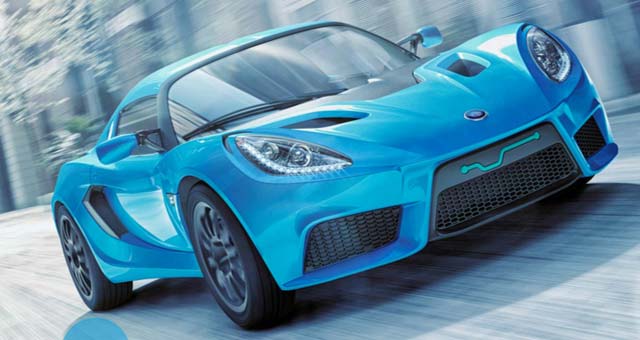 A host of aesthetic and functional enhancements to the exterior design accompany the aerodynamic enhancements. For example, the front air intake and outlet ducts on the bonnet have been reshaped to optimise airflow to the HVAC (heating, ventilation and air conditioning) system.

The vehicle’s battery packs have been clad in a protective composite casing which forms an integral part of the vehicle’s structure. This improves the SP:01’s torsional rigidity and provides an extremely robust barrier to protect the batteries from punctures in the event of an accident.

The changes to SP:01’s design ensure that it  will deliver on its promise to set new standards for performance and handling in the EV segment. Its high-power electric motor will propel the car to an impressive 155 mph (249 km/h) top speed and a 0-60mph time of just 3.7 seconds.

The rear-wheel-drive SP:01 features a compact, mid-mounted 210kW electric motor, a lightweight, purpose-designed battery pack and GRP (Glass Reinforced Polymer) bodywork fitted as standard. A carbon fibre option is also available for those who wish for a little more edge. 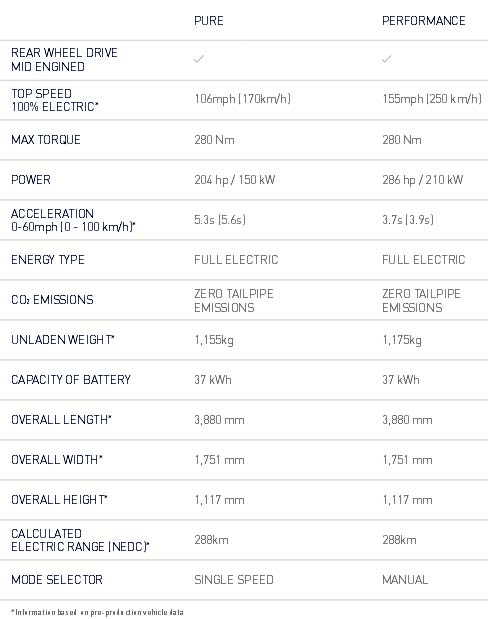