Engineers Develop Algorithms To Switch Out And Recharge Battery Modules 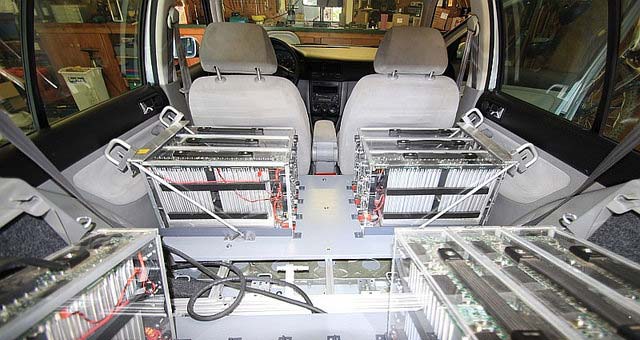 A team of engineers at the University of California, San Diego, are trying to accomplish just that, in partnership with a local San Diego engineering company.

Rather than swapping out the whole battery, which is cumbersome and requires large, heavy equipment, engineers plan to swap out and recharge smaller units within the battery, known as modules. They named the project Modular Battery Exchange and Active Management, or M-BEAM for short (http://www.modularexchange.com).

Engineers have already purchased and converted a car, a 2002 four-door Volkswagen Golf. They also built all the modules for one of the two battery packs they plan to use and are now looking for sponsors for their project, including companies or individuals that appreciate the benefits of having small exchangeable battery modules in an electric vehicle.

“This is a game-changing technology,” said Lou Shrinkle, an electrical engineer who is one of the major sponsors of the project. “This idea may seem straightforward, but there were some tough technical challenges that we had to solve to make this system robust and practical.”

Swapping battery modules could also have far-reaching implications for mobile and decentralized electrical energy storage systems such as solar backup and portable generators. The technology can make energy storage more configurable, promote safety, simplify maintenance and eventually eliminate the use of fossil fuels for these applications, Shrinkle pointed out.

Engineers not only believe that their approach is viable, but also plan to prove it. They will embark on a cross-country trip with a car powered by the removable, rechargeable M-BEAM battery modules. They plan to drive from coast to coast only taking breaks that are a few minutes long to swap out the modules that will be recharged in a chase vehicle. They believe they can drive from San Diego to the coast of South Carolina less than 60 hours—without going over the speed limit.

Algorithms for charge estimation and current control
A team led by de Callafon is designing the algorithms for charge estimation and current control, implemented in an embedded system that is part of the battery management system for each module. The algorithms will be able to handle battery modules with different charge levels, chemistry, age and condition and keep the modules working together uniformly. The team has published their findings in a recent paper titled “Current Scheduling for Parallel Buck Regulated Battery Modules” in the IFAC World Congress held in Cape Town, South Africa in August, 2014.

Xin Zhao, the graduate student that is part of the team, explains in the paper that rechargeable, removable battery modules in electric cars would solve numerous problems.

Being able to simply swap and combine battery modules would eliminate range anxiety and extend the range that cars are able to travel indefinitely — the average range of most affordable electric vehicles is about 70 to 100 miles per charge. Batteries themselves take 4 to 12 hours to charge with conventional power sources. Newer, fast-charge technology still takes about 30 minutes and involves running very high power through batteries, shortening their lifetime and reducing safety.

What would change
The team says there are many advantages in their approach of recharging and swapping out smaller modules within a large battery. The approach allows for a separation between the purchase of an electric vehicle and its battery pack. The price of electric vehicles would drop by about $10,000 if removable battery modules are leased rather than built into an electric vehicle.

Also, as of today, more than 40 percent of people living in cities don’t have access to wall outlets to charge their electrical vehicles at the curb or in a garage. Exchangeable modules could be taken out of the car and recharged at home. Exchangeable modules would also allow an expanded mix of chemistries and energy densities lowering costs and improving range. Removable batteries could even be brought into the home to be charged and be part of an electricity back-up system.

Challenges and future work
But there are challenges. At 20 to 30 lbs. each, the modules are not exactly light-weight. Researchers believe that as battery technology matures, module size will shrink to about the size of a tissue box, weighing less than 10 lbs. The ability to swap battery modules from an electric vehicle allows easy adaptation of such new battery technology.

A battery system based on exchangeable modules would also need an infrastructure that allows users to lease or purchase the rechargeable modules. Businesses that either charge the modules or rent out pre-charged modules would also need to be available throughout the country. But engineers point out that electric vehicle charging stations, especially fast-charge stations, are not widely available either. Exchange stations could easily be gradually deployed. Imagine simply exchanging your modules at the local gas station that charges them for you, much like you can fill up propane tanks today.

Electric shock can also be a risk during removal and replacement of high voltage modules. The battery management system developed by the research team ensures that the output voltage of the battery is equal to zero unless the battery is in the vehicle and enabled by a key switch. Modules are configured to exhibit only safe low voltages even when fully compromised during and after a crash and have built-in solid-state switches to handle a short circuit condition.