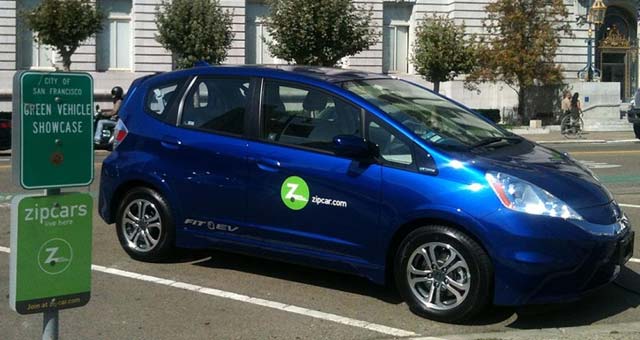 Zipcar announced the introduction of a 2014 Honda Fit EV, located at The University of California, Davis'(UC Davis) WestVillage, the largest planned zero net energy community in the United States.

In the course of a year, the community is designed to generate as much energy as it consumes. The low-carbon electric vehicle is designed to help address one of the largest contributors to carbon emissions – vehicle usage.

The new Honda Fit EV at UC Davis is located at West Village Square right across the street from WestVillage’s other Zipcar, a Honda Insight, in front of “The Hub Market.” Both vehicles are available to all Zipcar members ages 18+ for hourly reservations, starting at $8.50 per hour. Zipcar has had vehicles on campus at UC Davis since 2009.  Zipcar has nearly 40 vehicles in approximately 20 locations throughout the greater Sacramento area.

Zipcar is a longstanding pioneer in using advanced vehicle technologies as the first car sharing company in the United States to introduce electric vehicles, starting in Boston in 2002, and the first to offer hybrid vehicles through a partnership with Honda in Seattle in 2003. Today many of Zipcar’s vehicles are among the most fuel-efficient vehicles available on the market, including hybrids, electric vehicles, plug-in hybrid electric vehicles and other EPA SmartWay Certified and LEED Certified cars.

Honda’s 2014 Fit EV, based on the popular five-passenger Fit, is rated at a combined fuel economy of 118 MPGe, making it one of the most efficient cars on the road. When connected to a 240-volt circuit, the Fit EV battery can be recharged in less than three hours from a low charge indicator illumination point2 and has a range of approximately 82 miles.