UPS Deploys Electric Vehicles in the Streets of Rotterdam 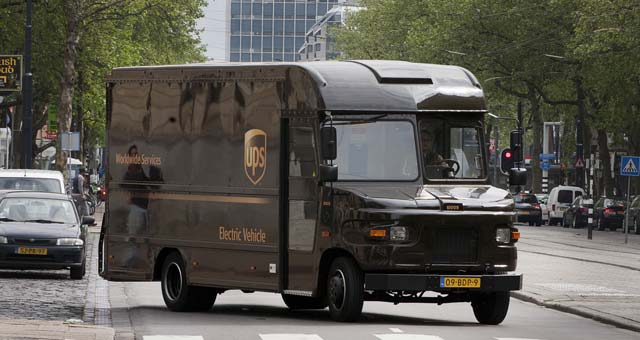 UPS announced the deployment of four fully electric vehicles that will deliver packages in and around the city of Rotterdam.

This deployment follows the introduction of six EVs on the streets of Amsterdam in October 2013. For this deployment, UPS partnered with FREVUE, an EU-supported urban e-mobility initiative that seeks to demonstrate to industry, consumers, and policy makers how electric freight vehicles can meet the growing need for sustainable urban logistics.

This vehicle model, known as the P80-E, has a gross vehicle weight rating (GVW) of 6,800kg and is powered by a single 90kw electric motor with 300Nm speed torque. It has a range of up to 100 km (62 miles). This operating radius makes it ideal for short routes in urban areas like Rotterdam. Like every UPS delivery vehicle in Europe, the P80-E has a limited top speed of 80 km/h (50 mph). To create this electric model, UPS worked with Germany-based company EFA-S (Elektro Fahrzeuge Schwaben GmbH) to convert vehicles from its existing, diesel-powered P80 fleet.

UPS continues to enhance its fleet using a “rolling laboratory” approach – employing its alternative fuel vehicle (AFV) fleet as a way to learn about how new technologies can be adapted for use in a large delivery fleet. UPS is also working with manufacturers, government agencies and non-profit organizations to advance new fuel technologies and run pilot projects before new vehicles are fully deployed.

Another innovation present in the P80-E is a kinetic energy recovery system (KERS). The KERS captures the energy created from braking to be reused. Vehicles are recharged from empty to full in around eight hours via an external power supply connected to the on-board charge unit.

UPS operates more than 3,100 AFVs worldwide, including more than 140 in Europe, with a variety of hybrid, electric and natural gas technologies. Between 2000 and 2012, UPS’s alternative fuel fleet traveled more than 475 million kilometers making deliveries to homes and businesses, the distance of one round trip from Earth to Mars. The company has set the goal of 1.6 billion kilometers by the end of 2017.[wzslider height=”400″ lightbox=”true”]