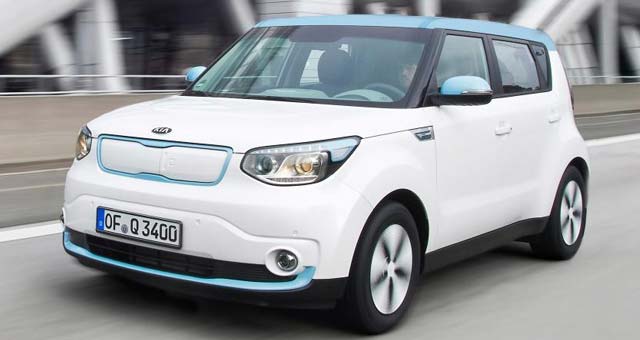 Kia Motors said it will start production of the all-electric Kia Soul EV in Korea next month.

Initially, the Soul EV will be exclusive to its home market, but Kia will offer the all-electric crossover in Europe and U.S. starting in 2016.

In Korea, the Kia Soul EV will cost 42 million won (about $39,400) before subsidies. Big EV subsidies in Korea can cut the Soul EV’s price in half.

The Soul EV is powered by an 81.4 kW electric motor, producing 285 Nm of torque, and a high-capacity 27 kWh lithium-ion polymer battery pack located beneath the cabin. The motor delivers its power to the front wheels through a single speed reduction gear set, allowing the Soul EV to accelerate from 0 to 100 kph (62 mph) in under 12 seconds, going on to a top speed of 145 kph (90 mph). Kia engineers are targeting a driving range of around 200 km (124 miles).

Hyundai, like Japanese rival Toyota, has long concentrated on fuel cell vehicles like ix35 Fuel Cell crossover, touting their longer driving range and shorter refill times. But like Toyota, Hyundai is expanding its offering by also investing in battery-powered cars.

“There is no clear direction about which eco-friendly cars will win. We are dividing roles of Hyundai and Kia, with Hyundai launching fuel cell cars and Kia focusing on electric cars,” Senior Vice President Lee Ki-sang said on Tuesday. “But the time will come when Kia will introduce a fuel-cell car. Hyundai is also preparing to launch a (battery-powered) electric car in 2016,” Lee said at the Korean launch of the Soul EV.

While Kia has offered the Ray EV  in Korea since 2012, sales of the electric model have been conservative, and exports non-existent. Korean sales of Kia’s Ray EV, Renault SA’s SM3 EV and General Motors Co’s Spark EV totaled just 713 units last year. Hyundai’s BlueOn is only used by government agencies.