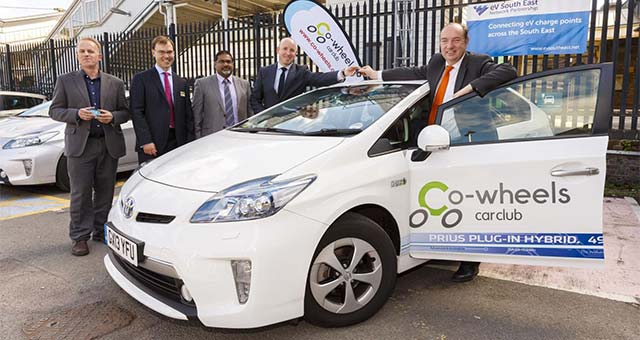 Toyota UK has provided a Prius Plug-in for a new transport initiative giving rail travelers access to a low emissions car club vehicle for the next leg of their journey.

The scheme gives holders of train operator Southern’s new smartcard – the key – access to the Prius Plug-in at Lewes railway station in Sussex. The car is operated by the Co-wheels car club, and makes use of a new electric vehicle charging point installed at the station.

Key holders are being offered discounted club membership, enabling them to use their smartcard to open up the Prius Plug-in and drive off. It is the first time the club has located a hybrid vehicle at a railway station and the project will run as a three-month trial.

Using a Prius Plug-in will help travelers reduce their carbon footprint; for those making local onward journeys from Lewes, Prius Plug-in has the potential to run entirely on its electric charge, with zero tailpipe emissions and zero fuel consumption. Anyone making a longer trip needn’t worry about running out of charge, as the Toyota will automatically switch to its hybrid system’s petrol engine as soon as electric power runs low.