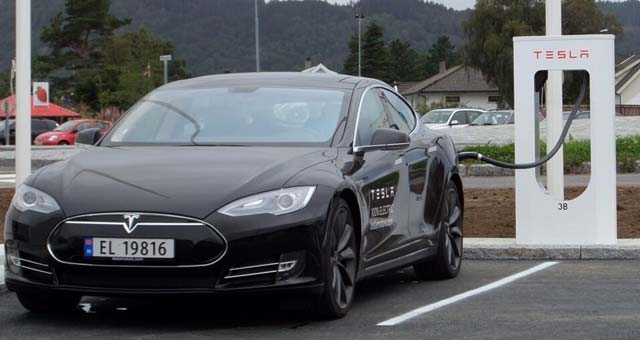 Having begun the first European deliveries of Model S this August in Norway, followed by Germany, Belgium, Denmark, Iceland, Luxembourg, the Netherlands, Spain and Switzerland, Frankfurt Motor Show is an important platform to showcase Model S to Europe.

“The focus of Model S on design, engineering and performance makes it very well suited for the European market,” said Elon Musk, Tesla co-founder and CEO. “This year has already been one of tremendous growth and expansion throughout Europe for Tesla and Model S. Before the end of this year, our European operations will expand even further, with new stores and service centres in locations including Hamburg, Düsseldorf, Stuttgart, Berlin, Paris, Cote d’Azur/Provence, Stavanger, Vienna, Amsterdam, Basel, Geneva, Rotterdam, Arnhem, Stockholm and London.”

At the same time that Model S hit European roads, Tesla energized Superchargers in Europe, including one on-site at Frankfurt Motor Show. Tesla Superchargers represent the most advanced charging technology in the world, capable of charging Model S 20x faster than most common charging stations. Superchargers provide half a charge in about 20 minutes, delivering up to 120 kW DC (Direct Current) power directly to the Model S battery.

Tesla’s first network of European Supercharging stations opened in Norway at the end of August, allowing Model S owners to travel conveniently and for free across Norway’s most vital and commonly used roads and highways. More European routes will be energized in the coming months, providing coverage well within the Model S rated range of 480 km per charge. By the end of 2014, 100 percent of the population of Germany, the Netherlands, Switzerland, Belgium, Austria, Denmark and Luxembourg will live within 320 km of a Supercharger station, with about 90 percent of the population in England, Wales and Sweden living within the same distance of a charging station.

“Tesla’s Supercharger network is a game changer for electric vehicles and will offer Model S owners free, fast charging for convenient long distance drives throughout Europe,” said JB Straubel, Chief Technical Officer at Tesla. “All our Superchargers are located near amenities like roadside restaurants, cafes and shopping centresso that road trippers can stop for a quick meal while their Model S charges for free.”