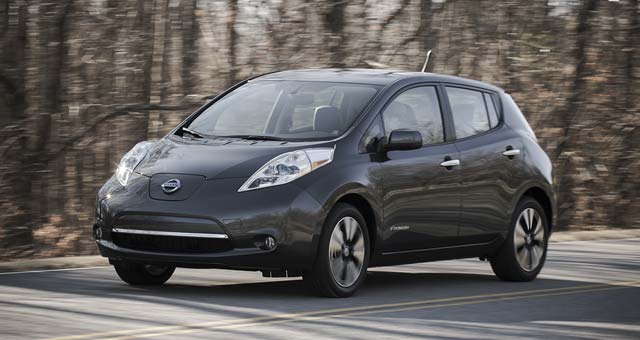 Nissan has announced that Canadian pricing for the new 2013 Nissan LEAF will start at a Manufacturer’s Suggested Retail Price (MSRP) of $31,698 for the newly-added S grade.

Depending on location, some consumers may purchase the 2013 Nissan LEAF at prices on par with gas powered vehicles of its size with provincial tax rebates, when it goes on sale in EV-certified dealer showrooms this July.

Nissan’s objective for the Nissan LEAF has always been to produce an affordable zero-emission vehicle for the mass market, and the 2013 Nissan LEAF is a prime example of that commitment with increased value at every trim level, making it more accessible for more people.

Nissan LEAF is powered by a responsive 80kW AC synchronous motor produced at Nissan’s Powertrain Assembly plant in Decherd, Tenn. The 2013 Nissan LEAF’s output is 107 horsepower, with 187 lb-ft. of torque. Energy is supplied by an advanced 48-module lithium-ion battery made at the new battery plant in Smyrna, Tenn.

Additions to the 2013 Nissan LEAF include: 17-inch alloy wheels, leather appointed interior, Around View® Monitor and 7-speaker Bose energy efficient audio system on SL models and a standard 6.6 kW onboard charger that significantly reduces 220V charging times by nearly half on all models. Also new is the availability of the Nissan LEAF App for Canadian Android users which will allow even more customers to control their Nissan LEAF from the comfort of their smart phone and will be backward compatible to previous generation models.