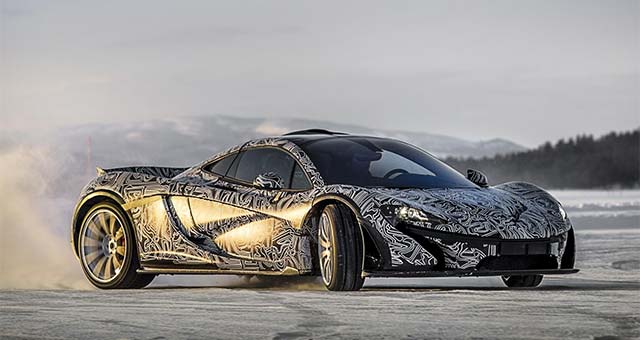 With only a few months remaining until the first deliveries will be made to just 375 customers, the development program for the McLaren P1 continues to accelerate as it nears its end.

This extensive work is being carried out to ensure that the McLaren P1 delivers on the target of being ‘the best driver’s car in the world on road and track’…or a frozen lake, for that matter.

As part of durability testing, the development team recently travelled with the McLaren P1 to the dramatic frozen landscapes of the Arctic Circle, in northern Sweden. Here, the car was put through its paces and tested to the extremes, in some of the most hostile and toughest conditions on the planet.

The testing schedule continues at pace, with XP prototypes running extensively across the globe, working to optimize the groundbreaking systems and technologies which have been borne of 50 years of race-winning knowledge and expertise.

This latest stage in the rigorous testing process for the McLaren P1 has been captured in the short film which can be viewed bellow.

The culmination of this testing and infamous McLaren attention to detail will be showcased over the summer, when the McLaren P1 will publicly demonstrate the power available from the mid-mounted 3.8-liter twin-turbo V8 gasoline engine and highly effective electric motor which generate 916PS, with a number of dynamic displays.

As plans for the 50th anniversary celebrations for McLaren continue, it has also been confirmed that the latest model from McLaren Automotive will feature as part of the planned activities at this year’s Goodwood Festival of Speed.[wzslider height=”400″ lightbox=”true”]