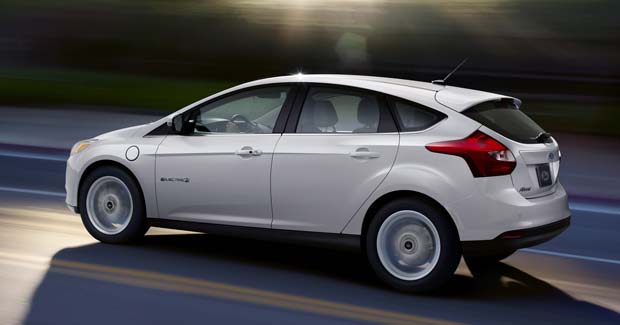 Ford Focus Electric has been granted HOV lane access in California by the California Air Resources Board (CARB).

The Ford Focus Electric will also be eligible for a $2,500 rebate to consumers on a first-come basis, Ford said.

In total, California Focus Electric consumers could net $10,000 if all incentives are fully taken advantage of.

The Focus Electric CVRP rebate approval comes on the heels of the March 2 announcement that it is America’s most fuel-efficient five-passenger car with a certified 110 miles per gallon equivalent (MPGe) city rating and 99 MPGe on the highway.

Focus Electric bests Leaf in other ways, too – more passenger room and a faster charging system that allows for a full recharge in just four hours, nearly half the time of the Nissan.

The EPA-approved Focus Electric label also certifies that the car has a range of 76 miles on a single charge compared with the 73-mile range of the Leaf. The Focus Electric can be driven up to 100 miles on a single charge depending on driving habits. The average driver drives 29 miles a day, according to the Bureau of Transportation Statistics website.

The approved label also will say customers could save $9,700 in fuel costs over the course of five years compared with the average new vehicle.

Ford will ramp up Focus Electric retail production in the first half of 2012 for dealership availability in California, New York and New Jersey. By the end of 2012, Focus Electric will be available in 19 markets across the U.S.

The Ford Focus Electric will start at $39,200 before state and federal incentives, excluding tax, license, registration, $795 destination charge and options.

HOV lane access
Traffic congestion continues to worsen in California where, according to the Texas Transportation Institute’s annual Urban Mobility Report, Los Angeles and the San Francisco-Oakland metropolitan area rank No. 3 and 7, respectively, for the worst congestion in the U.S. In Los Angeles alone, this congestion contributed to a total of 38 million gallons of wasted fuel over the course of a year. This congestion costs the average Los Angeles commuter an additional $1,464 a year, but HOV lane drivers can bypass a lot of that.