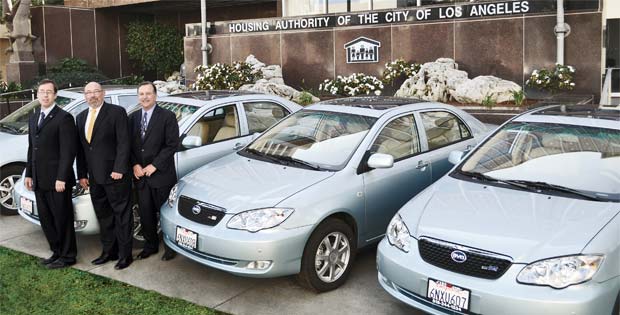 BYD Motors and the Housing Authority of Los Angeles (HACLA) began a testing program for the BYD’s F3DM plug-in hybrid vehicles, as the China’s company moves a step closer toward its goal of vehicle sales in North America.

The BYD F3DM (Dual Mode) sedans used in HACLA fleets can travel by electricity for 40 to 60 miles. Drivers can manually switch the vehicle to stay in all-electric vehicle or “EV mode” just like a conventional battery-electric vehicles throughout the life of the car.

If there is a requirement to go farther than 60 miles in a given day, the vehicle can be manually switched to plug-in-hybrid electric or “PHEV mode”, where a 1.0L gasoline engine can be engaged to extend the range another 300+ miles while charging the batteries.

The F3DM comes with an onboard overnight-charger which charges vehicles in less than 7 hours, allowing HACLA to install standard 220VAC outlets in its EV fleet parking areas.

BYD is also in discussions with HACLA to integrate solar power to charge an Energy Storage Station (ESS) during the day that could then discharge later during the EV fleet charging hours.

Company spokesman Paul Lin said Thursday that BYD is aiming at U.S. sales of its K9 electric bus next year and hoping to begin sales of its E6 electric car in the U.S. by 2012 — two years later than originally planned. The company has selected Los Angeles as its U.S. headquarters.

An updated version of the car will be displayed at the North American Auto Show next month.