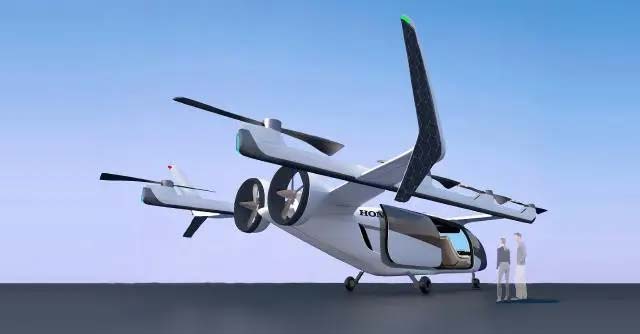 Honda Motor Co., Ltd. revealed the technology development direction the company is currently pursuing for the challenges Honda is taking on in new areas while leveraging its core technologies. This direction leads to the fulfillment of Honda’s 2030 Vision of serving people worldwide with the “joy of expanding their life’s potential.”

These new initiatives are made possible by core technologies Honda has amassed to date, including technologies in the areas of combustion, electrification, control and robotics.

These new areas include an electric vertical take-off and landing aircraft, avatar robot with a goal to expand the range of human ability and a new challenge in the field of outer space.

To make the mobility in the skies Honda realized with its original HondaJet even more accessible for more people, Honda is developing its eVTOL (electric Vertical Take-off and Landing) aircraft by taking advantage of a wide range of Honda’s core technologies.

In addition to clean operation realized by electrification technologies, eVTOL features safety at a level equivalent to that of commercial passenger airplanes realized by its simple structure and decentralized propulsive system and quietness due to relatively small diameter of rotors. This makes it possible for eVTOL to take off and land in the middle of a city without causing noise issues. Because of such features, the development race for eVTOL aircraft is getting increasingly vigorous. However, all-electric eVTOL aircraft face a range issue due to limited battery capacity, therefore the realistic use area is limited to intra-city (inside city) transportation.

To address this issue and realize user-friendly inter-city transportation with longer range, Honda will leverage its electrification technologies and develop Honda eVTOL equipped with a gas turbine hybrid power unit. The eVTOL concept will have a projected range of 400 kilometres (249 miles). 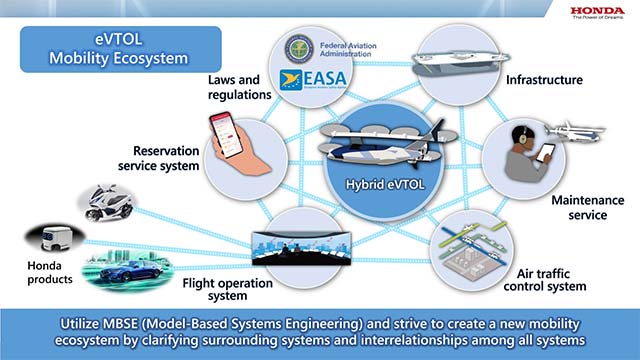 Moreover, in addition to electrification technologies, Honda eVTOL will feature technologies Honda has amassed in a number of different areas such as combustion, aerodynamics and control technologies.

Honda will strive to create new value for people by establishing a “mobility ecosystem” featuring eVTOL aircraft at its core, coordinated and integrated with mobility on the ground.

The company is working toward flight tests of a eVTOL demonstration model in 2025, after which it will make a decision on commercialization. Simultaneously, Honda aims to establish a “mobility ecosystem” featuring eVTOL aircraft at its core, coordinated and integrated with mobility on the ground.