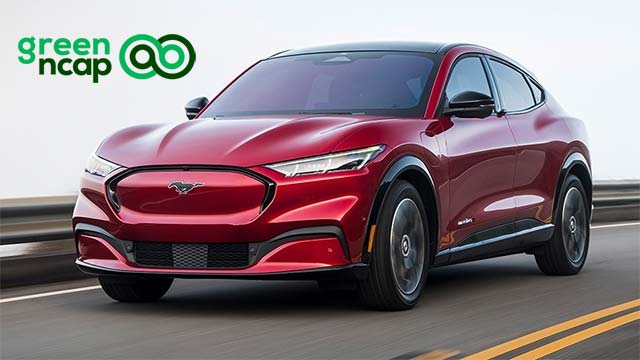 This clean and green five-star crossover is not, as its name might suggest, an electrified American Pony car but rather a reworked C2-platform vehicle similar to Ford’s 4th generation Puma and 3rd generation Kuga. It’s definitely a Ford, but Mustang-teased and a key competitor to Tesla’s Model Y and the Audi Q4 e-tron.

Being full electric, the Mach-E scored maximum points for the Clean Air Index and the Greenhouse Gas Index as emissions at the tailpipe are zero, showing its near zero impact on the local environment. Some energy is lost during the WLTC+ cold ambient temperature test (-7°C) and the high-load, motorway-like, BAB130 test, resulting in a 9.4 out of 10 score on Energy Efficiency. The worldwide-harmonised Light-duty-vehicle Test Cycle (WLTC) is a laboratory test where the car is started from cold. The higher the efficiency, the more kilometres can be driven on the same battery charge and the more economical the driving.

Overall, the MACH-E emerges with a maximum 5 star rating, a recommended green choice for consumers.

Ford’s new all-electric crossover SUV, the Mustang Mach-E, bears little resemblance to the 5-litre muscle car with which it shares its name. While its sports-car stablemate struggled to gain three stars in 2017, the Mustang Mach-E firmly secures a top five-star rating against the latest test requirements. The car comes equipped with a centre airbag, deployable bonnet for vulnerable road user protection and a host of advanced driver assistance features, offering high levels of driver support and crash prevention all around. Having simultaneously achieved a five-star rating by the environmental test programme Green NCAP, Ford demonstrates that fighting climate change will not stand in their way of improving road safety.