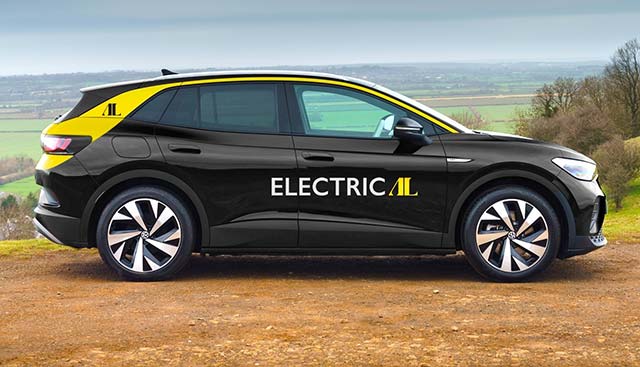 Volkswagen UK is celebrating the successful conclusion of one of its largest pure electric fleet agreements so far this year, and its biggest ID.4 fleet deal to date. London’s largest private transport provider, Addison Lee, has agreed a deal for 450 ID.4 models.

The deal, negotiated by Volkswagen UK’s Head of Fleet Nick O’Neill and his team, represents not only a major transaction in its own right, but also a huge vote of confidence in the practicality, versatility and reliability of the ID.4 SUV, which is part of Volkswagen’s new MEB-based range of purpose-built electric vehicles.

The ID.4 – which was voted 2021 World Car of the Year – is available with a choice of three battery variants offering a range of up to 322 miles (WLTP Combined) and four comfortably equipped trim levels: ‘Style’; ‘Life’; ‘Family’; and ‘Max’. A sporty dual-motor all-wheel-drive GTX variant is also available. All feature the latest Volkswagen technologies inside and out such as, at a minimum, LED headlights; Adaptive Cruise Control with City Emergency Braking System; 30-colour interior ambient lighting; and Discover Navigation Pro touch-screen navigation infotainment system with 10-inch display.

The deal also represents a major commitment towards the electrification of its fleet from Addison Lee. The initial roll out will see the firm add 450 ID.4 vehicles to its fleet. Over the next two years, Addison Lee will shift the remainder of its 4,000-strong fleet to electric by adding 200 fully electric vehicles every month, making it London’s largest fully electric fleet operator.

Welcoming the deal with Addison Lee, O’Neill said: “We have a strong and positive relationship with Addison Lee. Over 1,000 vehicles have been provided in recent years and we understand the high demands the company places upon all the cars in its fleet.

“That Addison Lee has chosen the ID.4 as its initial route to large scale electrification is a huge vote of confidence in this exceptional new car, the support available via Volkswagen UK, and the quality of our brand.”

Liam Griffin, CEO at Addison Lee added: “We are pleased and excited to build on our existing partnership with Volkswagen by adding the ID.4 to our fleet. This will be the first fully electric vehicle offered by Addison Lee and reflects our premium position in the private hire market.”