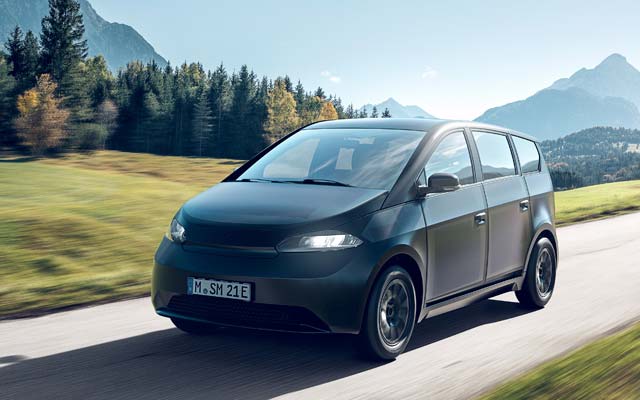 Munich-based mobility provider Sono Motors signed a cooperation agreement for a large-scale vehicle-to-grid (V2G) project in the city of Utrecht, Netherlands, with We Drive Solar.

The region of Utrecht is to connect local energy generation via electric vehicles’ smart charging capabilities, the first project of this scale in the world, with 500 bidirectional charging stations available to the public. On top of the energy produced via the integrated solar panels, all Sion will be charged using sustainable energy and will also be able to deliver excess energy back into the grid. The Sion’s discharging power of 11 kW combined with its battery, helps to reduce grid instabilities and the likelihood of blackouts. The 1.1 megawatt peak power provided by the 100 Sion is equivalent to that created by a large PV plant the size of about two football fields.

“This is the perfect project for Sono Motors to further our vision of a world free from fossil fuels as it is a clear demonstration that electric vehicles can support the transition of the energy sector as a whole. We are proud that the technology we develop is able to facilitate such a ground-breaking project, focusing on clean urban living, smart charging and shared mobility” says Jona Christians, Sono Motors’ CEO and co-founder.

“We are very pleased to collaborate with an innovative company like Sono Motors. They are the perfect partner for this venture as they already incorporate the use of solar energy, sharing and bidirectional charging into their product offering” says Robin Berg, Director of We Drive Solar.

Sono Motors, founded in 2016, is on a mission to enable environmentally conscious and affordable individual mobility for all in a world in which all vehicles are solar, shared and forgo the use of fossil fuels. The physical manifestation of this comes in the form of the Sion, a solar electric vehicle (SEV) that is able to not only extend its range by an average of 112 km per week via solar energy converted into electricity via the 248 solar cells, seamlessly integrated into the body of the car itself. This helps the Sion to become more self-sufficient and rely less on the grid. The Sion is also equipped with a 54 kWh LFP-battery that enables the car to travel up to 305 km on a single charge. The energy stored in the battery can also be used to charge or power other electronic devices (up to 3.7 kW) or even electric vehicles (up to 11 kW), as well as supplied to the home or the grid via the bidirectional on-board charger (up to 11 kW).

As part of the city-wide bidirectional charging and car sharing fleet it is planned that 100 Sion will be reserved by We Drive Solar. The aim is to develop this project on a larger scale in further cities and businesses in the Netherlands and other European countries. This is done in conjunction with the We Drive Solar consortium that operates a growing fleet of electric vehicles to be shared, with further deployment into the Utrecht region planned and with LOIs already signed with major OEMs such as Hyundai and Renault.