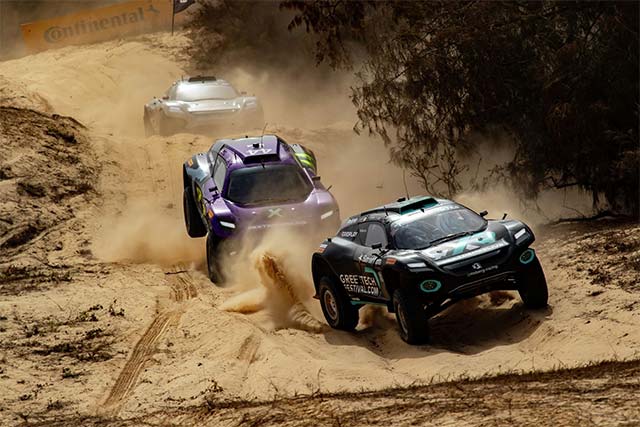 The pioneering electric SUV, off-road racing series backed up its dramatic curtain-raising Desert X Prix at the beginning of April by delivering even more spectacular moments and overtakes against the stunning backdrop of the Atlantic Ocean.

It was low tide but high drama in the grand final with two of the four cars retiring at the first corner, that left Rosberg X Racing to extend their championship lead and Veloce Racing to snatch a surprise result, bouncing back from their disastrous Desert X Prix.

The tight and technical Ocean X Prix course was a hit with the all-star field of Extreme E drivers and yielded close racing and several options for alternate routes which were deployed throughout the two days of competition.

It was Segi TV Chip Ganassi Racing’s Kyle LeDuc that took the Super Sector title, earning an extra five points for his team setting the fastest time of 1m50.891s – 1.289 seconds ahead of X44’s Sébastien Loeb.

Nico Rosberg, Founder and CEO of Rosberg X Racing, said: “I’m so happy for us as a team to have won in Extreme E for the second time. Two out of two – wow!!

“You know, it’s not to be underestimated the challenge that was out there this weekend. It’s so difficult because no one really understands the cars properly, as you don’t get a chance to test them. So, you have to guess and figure things out – as a team, we’re really trying to bring a Formula One approach to Extreme E here which is really helping us a team to perform. It’s been an amazing team effort, we just kept building it up through the weekend. And it’s so cool as well that in AlUla, it was Johan that very much did it at the start and Molly followed on, but today it’s Molly that made the magic in the final and then Johan brought it home – such a brilliant dynamic which really underlines the topic of equality which is one of the things that this championship is based on – that’s fantastic to see.

“The race format here has been a big step forward from AlUla in terms of development for race excitement – but it’s still early stages and there’s still a way to go. One needs to analyse again, and I think we keep on seeing more and more glimpses of such awesome motor racing and this will continue to evolve into a super spectacle the more we go on. Remember, nobody’s ever done this before, and you have to be openminded and accept that you are going to learn and make it more and more exciting each time.

“I love this whole championship and being in the role of team principal – I’m still as competitive as hell even though I’m not actually driving.. Anyway, we have the two best drivers in the car who are doing a much better job than I could – and I couldn’t be happier!”

Drama unfolded before the first corner in the Ocean X prix grand Final as GridPlay winners Veloce Racing opted to start on the third grid slot, but the advantage was quickly lost as Stéphane Sarrazin was squeezed out at the first gate dropping back to last position.

JBXE’s Mikaela Åhlin-Kottulinsky picked up rear-wheel damage before she even reached the first corner and inevitably was forced to retire the car, as was Cristina Gutiérrez in the X44 car who came to blows with the Rosberg X Racing ODYSSEY 21 – in an incident reminiscent of the two Formula 1 World Champions on-track disputes in 2016 – at turn one and ended her day on the sidelines.

Molly Taylor and Sarrazin were therefore left to duke it out for the lead, with the Frenchman closing the gap throughout the lap and ending his stint hot on the heels of the 2016 Australian Rally Champion.

To ensure officials could safely clear the stricken X44 and JBXE cars, a brief red flag was deployed, as the intense battle for the lead was put on hold whilst the drivers made their way into the switch zone.

A standing start restart was initiated as Jamie Chadwick and Johan Kristoffersson prepared for an all or nothing, one-lap showdown.

A close-fought drag race down to the first gate ended with light contact between the two ODYSSEY 21s handing Kristoffersson the advantage. Once he had reached the technical section of the course, the three-time FIA World Rallycross Champion began to stretch his legs opening up a 15-second advantage to win Rosberg X Racing’s second Extreme E X prix in succession.

With the tide coming in on a spectacular Ocean X Prix, the Extreme E fraternity will return to the championship’s floating paddock – the St Helena – and head north to Greenland for the Artic X Prix on 28/29 August.