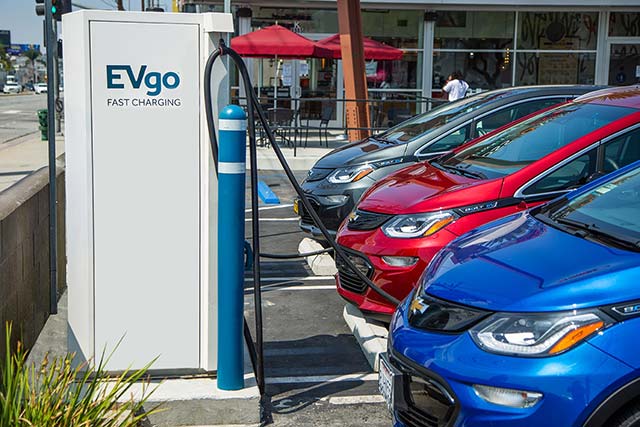 EVgo, the nation’s largest public fast charging network for electric vehicles, announced today that it was awarded a grant by the Commonwealth of Pennsylvania to deploy three new DC fast charging locations capable of simultaneously charging 14 EVs at retail centers in the Philadelphia area and near the Pittsburgh International Airport. Development of the new stations will be financially supported by the Pennsylvania Department of Environmental Protection’s (DEP) Driving PA Forward initiative, with funding provided through a Volkswagen environmental mitigation settlement Appendix D grant.

“EVgo is excited to partner with the Pennsylvania DEP to expand the reach of reliable and convenient fast charging to more EV drivers in the state,” said Cathy Zoi, CEO of EVgo. “Public-private partnerships are key to spurring EV adoption, and it’s especially meaningful for me, someone who grew up in Philadelphia and Pittsburgh, to help bring two cities I previously called ‘home’ closer to an all-electric future. We look forward to the continued growth of EVgo’s network in Pennsylvania and beyond, as the demand for fast EV charging continues its rapid expansion across the country.”

EVs are a key part of any state’s efforts to reduce emissions and boost the economy. Through the Driving PA Forward initiative, the Pennsylvania DEP aims to permanently reduce NOx emissions by as much as 27,700 tons. As part of this effort, the state has allocated approximately $10 million over a 5-year period to fund a competitive grant program for acquisition, installation, operation and maintenance of EV fast charging equipment and hydrogen fuel cell vehicle supply equipment. EVgo was chosen as a recipient for the first and second rounds of this state grant program, which is designed to assist with the installation or expansion of strategically significant zero emission vehicle fueling projects.

As of September 2020, Pennsylvania had over 15,000 locally registered EVs – a more than 34% year over year increase and a nearly 150% expansion since the same point in 2018. With EV momentum building within the state, the need for convenient and reliable charging options is growing in response. Currently, there are less than 120 non-Tesla fast chargers in the state of Pennsylvania according to the U.S. Department of Energy. Today’s news will add 10% more public fast charging capacity to the Keystone State, and through EVgo’s new stations, drivers in the Philadelphia and Pittsburgh areas can enjoy efficient fast charging while they shop. The expansion will build on the 2,200+ members already served by EVgo in and around the two cities today.