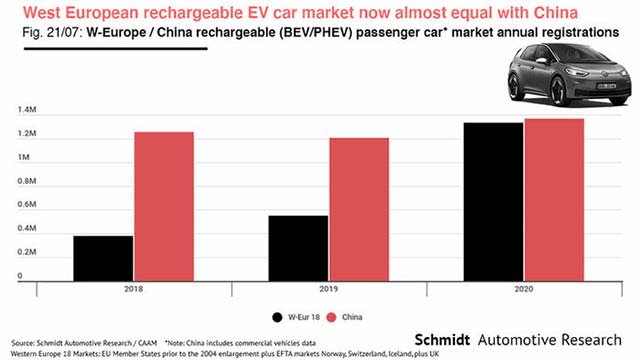 The West European plug-in car market finished 2020 under 35,000 units behind the Chinese plug-in market, according to Schmidt Automotive Research report.

Although that doesn’t sound close on the surface, the difference between the two motoring giants at the end of 2019 was still a mammoth 650,000 units.

The West European market that includes the original EU member states before the 2004 enlargement plus Norway, Iceland and Switzerland saw a near-even split between BEVs and PHEVs contribute to the 1.33 million new passenger cars entering European roads last year.

While in China, according to CAAM data, four-in-five of the plug-ins entering roads there were of the pure electric BEV variant last year.

European volumes were boosted by a new increased level of fleet average CO2 emissions levels being enforced across the EU region (including Norway and Iceland as well as a transitional UK) last year.

This forced manufacturers that were previously reluctant to introduce less profitable plug-in models to bring these to market in order to meet their CO2 obligations and avoid costly fines for non-compliance.

Switzerland also introduced a similar level of new CO2 legislation in 2020, seeing a boost here too.

Even more generous purchase and fiscal subsidies were on offer, making the purchase (or lease) of a plug-in even more attractive, to both the wallet and tax bill.