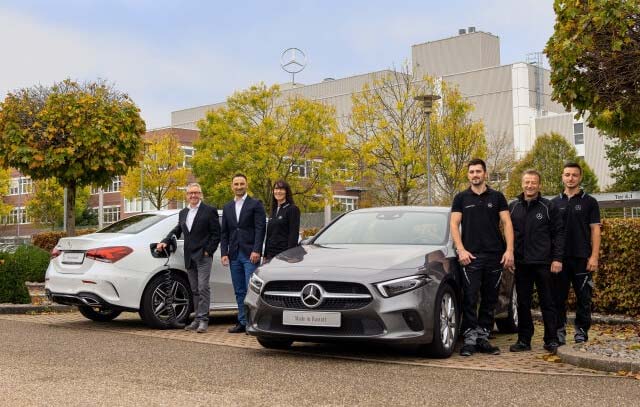 Supported by a systematic digitisation of production processes, Mercedes-Benz Rastatt plant and its highly skilled team have implemented the simultaneous ramp up of two body variants: the A 250 e and the A 250 e Sedan.

The Mercedes-Benz A and B-Class with hybrid drive celebrated their world premiere at the 2019 International Motor Show (IAA) in Frankfurt am Main in Germany. Plug-in hybrids are an important milestone on the road to emission-free driving. The focus of the new compact vehicles with plug-in hybrid drive EQ Power is on (electric) driving pleasure and everyday usability. The electric range consists of 70 to 75 km (NEFZ).

By 2039, Mercedes-Benz Cars is targeting a CO2-neutral new car fleet, and by 2030 the company is already targeting more than 50% of passenger car sales from plug-in hybrids or full-electric vehicles. This also applies to the production process itself: since 2011 the Mercedes-Benz Rastatt plant has already implemented various measures which have nearly halved the specific CO2 emissions per vehicle in production.

Supported by a host of digital processes, such as working with mobile devices, automatically guided transport systems (AGVs) and a paperless factory, Rastatt plant employees can respond flexibly and efficiently to a various customizations, such as optional extras and drive variants. Mercedes-Benz Cars’ high production standards in ensure high quality around the world and across all vehicle types.

The A-Class with plug-in hybrid drive is being produced on the same line at the Mercedes-Benz Rastatt plant as models with conventional drive systems. The production of vehicles with different drive types can therefore be adapted flexibly and efficiently. The plant is thus working at optimal capacity and the Mercedes-Benz high production and quality standard are guaranteed.

“The Rastatt plant is already on the road to transformation, moving towards new technologies, drive system types and changes to the scope of work. As part of this, the ramp up of the compact plug-in hybrids marks a milestone. Therefore, safety is a key issue: security of the site, of our colleagues’ workplaces, of the region and of the future of our workforce. The future is ours because of the safeguards we are putting in place,” says Murat Sür, Chairman of the Works Council at the Mercedes-Benz Rastatt plant.

The Mercedes-Benz Rastatt plant gained its initial experience building electric vehicles from 2014 to 2017. During this period the B 250 e, a vehicle with an all-electric drive system and a standard range of up to 230 kilometres, was produced.

With the production of hybrid vehicles and of the upcoming electric vehicles, the Mercedes-Benz Rastatt plant is making an important contribution to “Ambition 2039.” This is how Mercedes-Benz Cars refers to its ambitious path toward sustainable mobility and increased climate protection throughout the entire value-added chain. By 2039, the Group is aiming for a carbon neutral new passenger car fleet, and by 2030 Mercedes-Benz aims to reach more than half of the world’s passenger car sales with plug-in hybrids or purely electric vehicles.

The hybrid module which drives the A-Class is extremely compact: the electric motor is integrated into the eight-speed dual clutch transmission. For the first time on a Mercedes-Benz vehicle, the combustion engine is started exclusively by the electric motor – the compact hybrids do not have a separate starter. The electric machine can reach 75 kW. Together with the 1.33-litre four-cylinder engine, this produces a system output of 160 kW (218 hp) and a system torque of 450 Nm. Thanks to the electric motor’s EQ Power, these vehicles respond to the accelerator pedal very rapidly and deliver impressive performance: the A 250 e, for example, accelerates from 0 to 100 km/h in 6.6 seconds, with a top speed of 235 km/h.

A lithium-ion high-voltage battery, which has a total capacity of approximately 15.6 kWh, serves as an electric energy storage unit. It can be charged at an external AC or DC electric energy source. The high-voltage batteries are produced from the wholly-owned Mercedes-Benz subsidiary Accumotive. Since 2012, battery systems for electric and electrified vehicles from Mercedes-Benz and smart as well as commercial vehicles are produced in Kamenz in the east of Germany. The site in Kamenz, consisting of two battery factories, is state-of-the-art and one of the largest in the global automotive industry. In total, the battery production network of Mercedes-Benz Cars will consist of nine factories at seven locations on three continents.