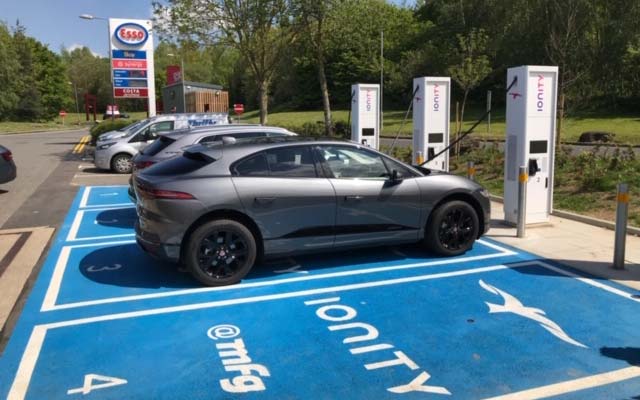 IONITY, a joint venture between Daimler, Ford, BMW and the Volkswagen Group with Audi and Porsche, has partnered with Extra MSA Group, a long-term specialist investment owner, developer and operator on the UK Motorway Network.

IONITY have contracted to install HPC Stations at eight Extra ‘umbrella branded’ MSAs, each initially comprising up to six state-of-the-art 350 kW Chargers. This agreement represents another step in IONITY’s pan-European expansion, which will see up to 2400 Chargers installed by end of 2020.

The first of the IONITY/Extra HPC Stations is targeted for opening at Extra’s new M1 J45 Leeds Skelton Lake MSA later this year.  This is in conjunction with a £60m plus investment by Extra for a high quality ‘new concept’ MSA facility, the construction works for which are now well advanced.  The other Extra ‘umbrella branded’ MSAs are at M25 Cobham, A14(M11) J28 Cambridge, M40 J2 Beaconsfield, M5 J28 Cullompton, M65 J4 Blackburn with Darwen, A1M J10 Baldock and A1M J17 Peterborough.

As a new generation of electric vehicles enters the market, IONITY’s charging network will play a critical role in making e-mobility a convenient, reliable and everyday experience. Due to their 350kW capacity and the strategic positioning of its Stations, IONITY’s network will make EV travel across the UK and Europe a truly hassle-free experience.

A key part of fulfilling this ambition is partnering with Service Area providers to bring HPC Stations to strategic and convenient Motorway locations. Whilst 50kW charge points are more common, their low power output means that charging takes a considerable amount of time, potentially delaying motorists for extended periods and not commensurate with new electric vehicle technology.

IONITY’s network uses 350kW Chargers that can top up or charge vehicles in less than 20 minutes, making long distance travel significantly easier and quicker. It is for this reason that HPC Stations are seen by many as a necessary catalyst to the widespread adoption of electric vehicles.