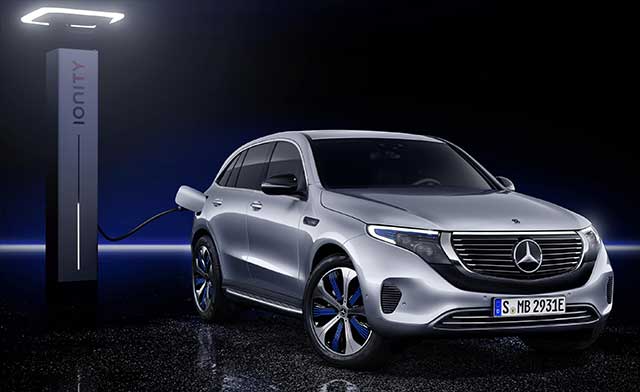 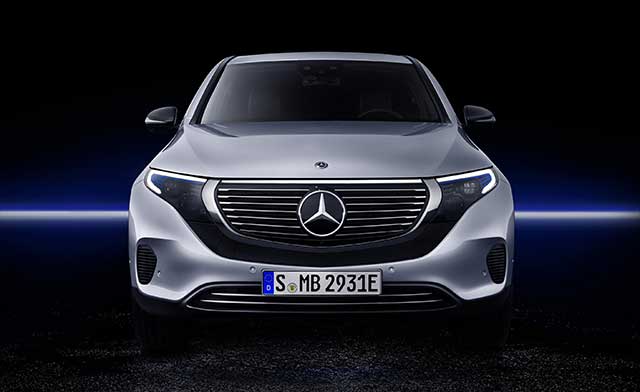 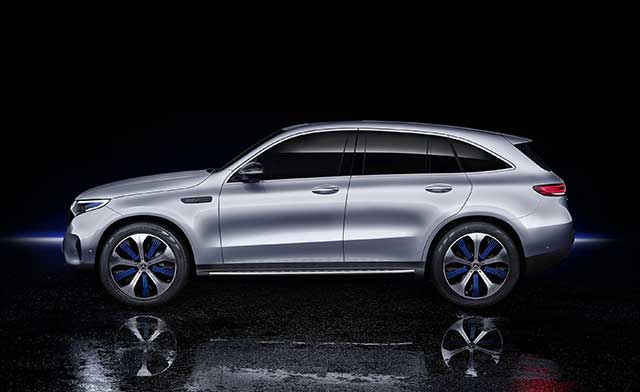 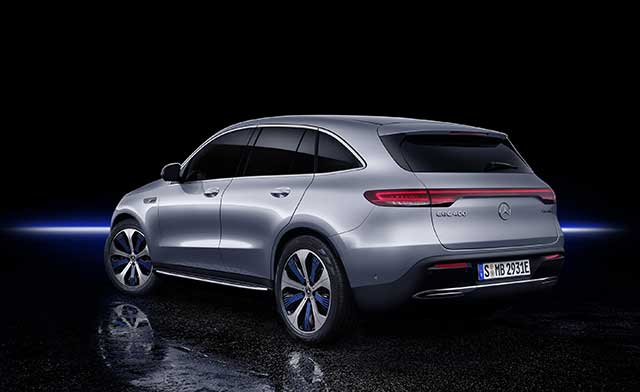 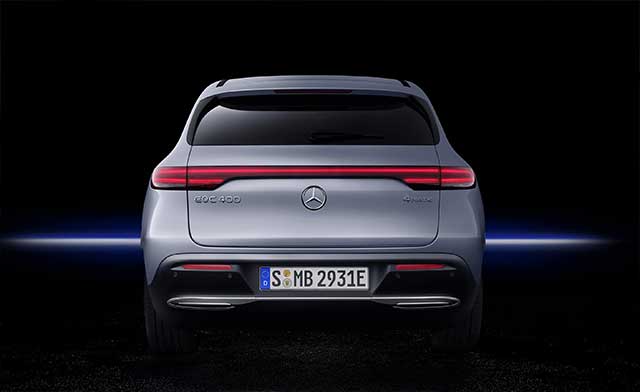 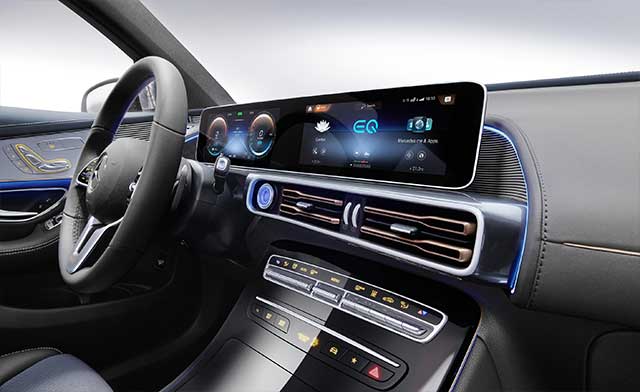 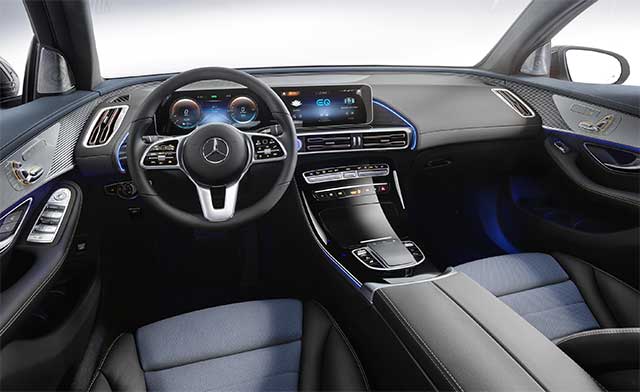 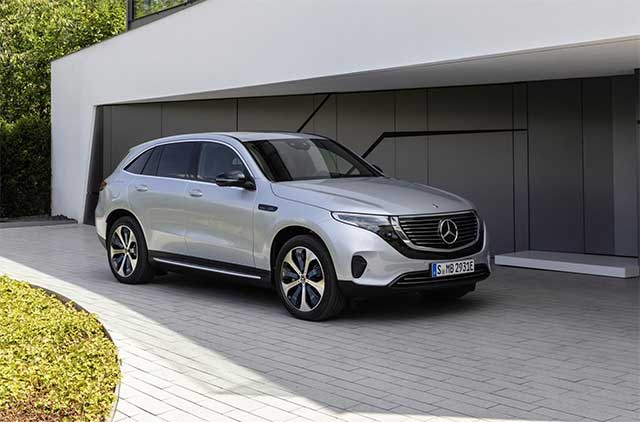 At CES 2019 in Las Vegas the first Mercedes-Benz vehicle from the EQ brand is celebrating its U.S. premiere. The EQC symbolizes the beginning of a new mobility era at Daimler.

With its seamless, clear design and color highlights typical of the brand, it is a pioneer for an avant-garde electric look while representing the design idiom of Progressive Luxury. With respect to quality, safety and comfort the EQC is the Mercedes-Benz among electric vehicles, and highly convincing in the sum of its attributes. These elements are accompanied by dynamic performance, thanks to two electric motors at the front and rear axles with a combined output of 402 hp.

Thanks to an ingenious operation strategy, the EQC has a preliminary estimated range of 450 kilometers (279 miles) according to the European cycle NEDC. EQ also offers comprehensive services with Mercedes me connect, which makes electric mobility convenient and suitable for everyday driving.

As the first Mercedes-Benz model under the new product and technology brand EQ, the Mercedes-Benz EQC has many trailblazing design details and color highlights typical of the brand. Both inside and out, the EQC embodies the design idiom of Progressive Luxury. This arises from the combination of digital and analogue elements as well as the seamless merging of intuitive and physical design.

By virtue of its muscular proportions, the EQC is classed as a crossover SUV. The extended roofline and window layout with a low shoulder line and the coupe-like roof recess at the rear visually position it between an SUV and an SUV coupe.

As the first Mercedes-Benz model to be launched under the new product and technology brand EQ, the EQC features an all-new drive system development with compact electric drivetrains at each axle. These give the EQC the driving characteristics of an all-wheel drive vehicle.

To reduce power consumption, the electric drivetrains are configured differently: the front electric motor is optimized for best possible efficiency in the low to medium load range, while the rear motor adds sportiness. Together, they generate an output of 402 hp and a maximum torque of 564 lb-ft.

Mercedes-Benz engineers have enhanced noise comfort with a number of measures. In the EQC the powerpacks are isolated by rubber mounts at two points: where the powerpack connects to its subframe and where the subframe connects to the body. This effective isolation is supplemented with insulation measures. As a result, the interior of the EQC is extremely quiet.

The lithium-ion battery, which has an energy content of 80 kWh (NEDC), supplies the vehicle with power. The power consumption and range of electric vehicles greatly depend on the driving style. The EQC supports its driver with five driving programs through DYNAMIC SELECT, each with different characteristics: COMFORT, ECO, MAX RANGE, SPORT and INDIVIDUAL for an individually customizable program. In the more economical driving modes, the haptic accelerator pedal that prompts the driver to conserve power plays an important role. The driver is also able to influence the recuperation level using paddles behind the steering wheel.

The ECO Assist system gives the driver comprehensive support by prompting the driver when it is appropriate to lift off the accelerator, for example when the vehicle is approaching a change in speed limit, and by functions such as coasting and specific control of recuperation. For this purpose, navigation data, traffic sign recognition and information from the intelligent safety assistants (radar and stereo camera) are linked and processed.

As standard the EQC is equipped with a water-cooled onboard charger (OBC) with a capacity of 7.4 kW, making it suitable for AC charging at home or at public charging stations.

Within the EU the charging process at a Mercedes-Benz Wallbox is up to three times faster than at a household socket; in the U.S. the time advantage when charging at a Wallbox is even up to eight times as much, because here the voltage at a household socket is usually 120 V. It is faster with DC charging – which is standard for the EQC, with a suitable market-specific plug – for example via CCS (Combined Charging Systems) in Europe and the USA, CHAdeMO in Japan or GB/T in China. Depending on the SoC (status of charge), the EQC can be charged with a maximum output of up to 110 kW at an appropriate charging station. It then takes around 40 minutes to charge from     10 to 80 percent SoC (provisional figures).

Testing: Endurance tests around the world

By market launch, 200 prototypes and pre-production vehicles of the EQC will have covered several million miles across four continents (Europe, North America, Asia and Africa). The test program is comprised of more than 500 individual tests. Like all Mercedes-Benz vehicles, the EQC must pass the demanding standard test program. There are also special tests for the electric powertrain, the battery, and the interplay of all powertrain components.

In the process, the test experts are able to build upon the extensive findings from their digital testing work, used to ensure both the buildability of the vehicle and for the simulation of crash behavior, aerodynamics and NVH (noise, vibration, harshness). In addition there are intensive tests on numerous test rigs at the Mercedes-Benz Technology Center in Sindelfingen. The ratio between digital and real testing is roughly 35 to 65 percent.

Production: Preparations in full swing in the Bremen plant

Production of the EQC will start in 2019 at the Mercedes-Benz plant in Bremen. The new EQC will be integrated into ongoing series production as a fully electric vehicle, and the very latest production technologies will be employed.

In series production, the joining of the powertrain to the body is called the “marriage.” One decisive innovation is the battery-joining center where the EQC undergoes a second “marriage” following installation of the two electric motors in the bodyshell. This is where the EQCs are equipped with a battery for the first time. The body is suspended from a C-carrier and deposited on a frame. Support arms raise the battery to the vehicle’s floor from below, and an employee monitors the automatic bolting in place.

In parallel with this, production of our own batteries for the EQC is coming on stream at the expanded battery plant in Kamenz (near Dresden).