First Shipment Of 2019 Mitsubishi Outlander PHEV Arrives In The UK 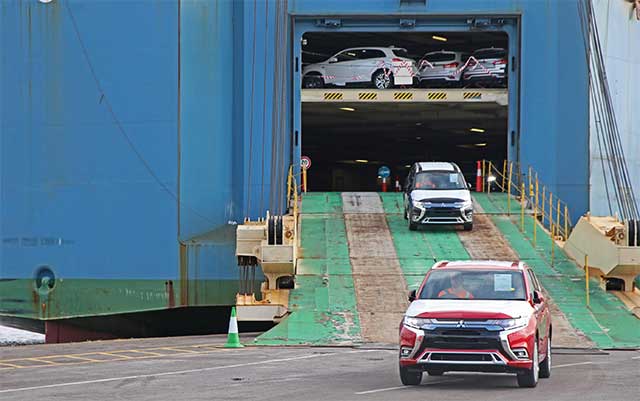 In preparation for the launch of the new 2019 Mitsubishi Outlander PHEV, which goes on sale in the UK on August 1, the first shipment of vehicles has arrived in the UK at Bristol’s Royal Portbury Docks, with more shipments set to dock in the following weeks.

This first batch of around 400 vehicles will enable Mitsubishi Motors in the UK to meet a surge in demand for the UK’s most popular plug-in vehicle, and will be closely followed by nearly 2,000 vehicles in the coming weeks.

The new 2019 Mitsubishi Outlander PHEV has been engineered to meet the latest emissions regulations and comfortably qualifies for the government plug-in car grant thanks to its WLTP emissions of 46g/km and EV range of 28 miles, while also attracting the lowest possible BIK rate of 13 percent.

These impressive figures are a direct result of the extensive revisions the Mitsubishi Outlander PHEV has received for 2019. A new 2.4-litre Atkinson-cycle petrol engine produces 135hp (up from 121hp) across a wider rev range (211Nm vs 190Nm). The rear electric motor output increases to 95hp and the drive battery benefits from a 10% increase in output, the overall capacity is increased to 13.8kWh thanks to new battery cells, all of this results in WLTP combined fuel economy of 139mpg.

To complement the drivetrain enhancements, a number of other changes ensure the Mitsubishi Outlander PHEV is even more pleasurable to drive. The front and rear shock absorbers have been revised to improve its low-speed ride and a new “Sport Mode” brings with it sharper throttle responsiveness and more grip via the Super All-Wheel Control system. The steering ratio has also been revised and the power steering ECU re-mapped to offer more responsiveness and feel, while larger front brake discs boosts stopping power. There’s also a new “Snow Mode” to improve low-grip launching and cornering abilities on slippery surfaces.

Rob Lindley, Managing Director, Mitsubishi Motors in the UK said: “The engineering improvements on the 2019 Outlander PHEV show a significant and progressive step forward and demonstrates Mitsubishi’s knowledge and expertise as one of the pioneers of plug-in hybrid technology. The Mitsubishi Outlander PHEV remains the UK’s most popular plug-in vehicle, and the revisions made for 2019 should help retain this status. Current year to date sales in the Ultra-low emission sector are up 27.7%, and this is an area of particular importance to us as a brand as we continue to meet consumer demand. The ongoing sales success of Outlander PHEV and our other SUVs has meant that we have been able to sustain a period of growth in the passenger car market, with sales up 13.6% year on year.

The first examples of the new 2019 Mitsubishi Outlander PHEV will be delivered to UK dealers in the coming weeks prior to its on-sale date of August 1. UK pricing and specification will be announced on that date.