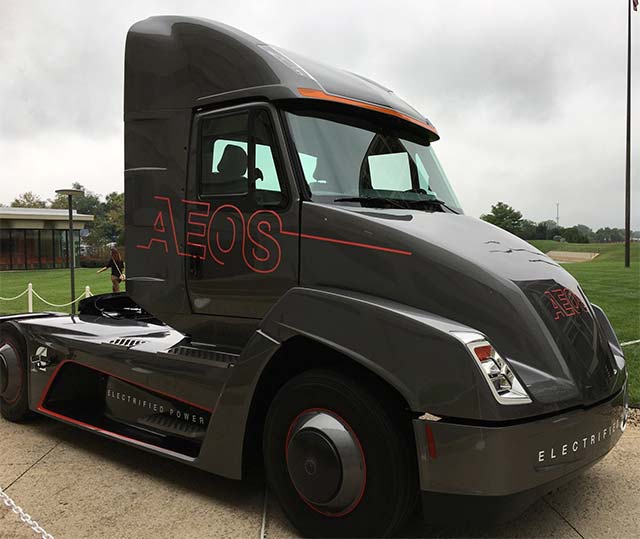 The 18,000-pound tractor cab, dubbed AEOS after one of the four-winged horses driving the chariot of the Sun God, Helios, across the sky in Greek mythology, is just a demonstration model. But the Class 7 urban hauler tractor is fully operational and has a maximum payload of 44,000 pounds.

The AEOS uses a 140 KWh battery pack instead of a 12-liter engine. The weight of the electric powertrain is roughly equal to that of the removed engine, aftertreatment, transmission and fuel tank. The concept truck has a range of about 100 miles on a single charge for city driving that’s extendable to 300 miles with additional battery packs. The powertrain and truck will enable Cummins to learn more about the potential electrification holds for larger vehicles.

A regenerative braking system and the potential for solar panels on the trailer roof can send energy to the battery pack. Air drag is reduced by replacing side mirrors with an in-dash camera system. The truck achieves a significant air drag reduction via its highly streamlined design as well as a better sealed truck body and underbody – with no front radiator intrusion. 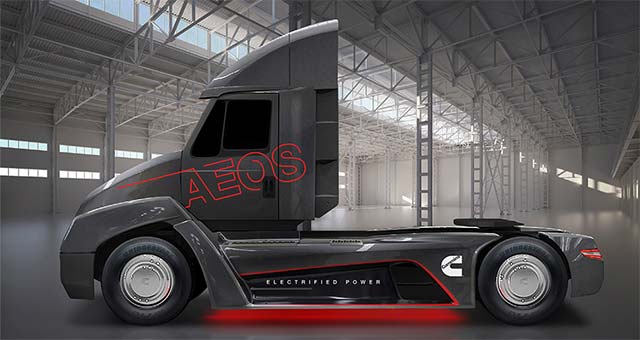 The AEOS can be recharged in about an hour at a 140 kWh charging station, and Cummins’ goal is to get that down to 20 minutes by 2020, reducing down time for its business customers. Production begins in 2019.

Cummins in June announced that it would start producing electric powertrains by 2019. The company’s Tuesday unveiling of AEOS was another major step in Cummins’ evolution, company officials said.