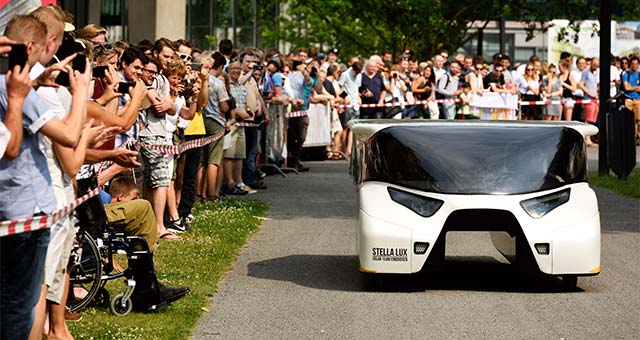 Stella Lux is an intelligent, solar-powered family car that generates more power than it uses. The car has a range of at least 1,000 km (620 miles) in the Netherlands, with enough space for four people, and is fitted with a specially designed navigation system. The team will take part with the car in the Cruiser Class of the Bridgestone World Solar Challenge in Australia on 18 October 2015.

By combining the aerodynamic design with lightweight materials like carbon and aluminium, the Eindhoven student team has once again come up with a very energy-efficient design. Stella Lux can reach a range of 1,000 km on a sunny day in the Netherlands. On balance the car generates more energy than it uses, which makes it energy-positive. Excess energy can be returned to the power grip, helping to deal with societal problems relating to the use of energy.

This year the student team is once again taking part in the biennial Bridgestone World Solar Challenge in Australia. The race for solar-powered cars covers a distance of 3,000 km, and goes right through the heart of the outback from Darwin to Adelaide. The Eindhoven team competes in the Cruiser Class for family cars. Here the emphasis is on building a practical, user-friendly solar‑powered car, rather than on pure speed. The team won the Cruiser Class title in 2013 with its first car, Stella. This year’s race places more emphasis on speed than in 2013, which is why they have decided to build a new and lighter car with fewer seats, while still going for a fully-fledged family car.